Telltale Games has announced the release dates for the final episode of Clementine’s current adventure. You won’t have to wait long, as the the story wraps up next week.

Beginning on Tuesday, August 26, PC, Mac, and PSN players in North America will be able to download No Going Back, the final episode. On August 27, Xbox 360, and European PSN players will gain access. Finally, on August 28, the final chapter comes to iOS.

The episode will be available for $4.99 a la carte on PSN, Xbox Live, and iOS. It’s also part of the Season Pass on all platforms. 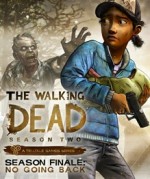