In Devolver Digital's E3 campground, we had the chance to check out the latest title from Serious Sam developer Croteam. The Talos Principle is built using the same engine as the studio's bombastic blast-fest, but that is where the similarities end.

The Talos Principle is a first-person puzzle game that blends the physics of Portal with the philosophy of Myst. Our demo begins in a small area with three puzzles ramping up from easy to difficult. The serene forest setting and medieval stone architecture is juxtaposed with force fields, electrical equipment, and sentry guns.

The goal in each small puzzle was to reach a tetronimo, though their purpose is not made clear until later. Things began easily, as we pick up jammers to turn off force fields and turrets to allow passage. From there, we are introduced to reflectors which connect beam generators to receptors in order to shut off force fields.

The final challenge brings those concepts together with light physics puzzling. In the last area, we are tasked with using the tetronimos we had collected (and some already in our inventory at the start) to fully fill a gridded stone tablet. Fitting the blocks together perfectly takes some doing, but there are multiple solutions.

Once all three puzzles are solved, the color washes out of the world and a voice speaks. He does not identify himself, and only suggests that it is because of him that you exist.

There is a computer terminal hidden nearby, and interacting with it reveals that the player character has two, metal hands (and likely a completely robotic body). Through the interface, which is set up to mimic DOS, another entity reveals itself.

After that conversation, the voice warns that whatever is hiding in the computer shouldn't be trusted. Narrative designer Tom Jubert (The Swapper, FTL) tells us that there are choices to be made throughout the game that will change the player's relationship with the voice.

We get the impression that the entity in the computer is akin to the snake in the Garden of Eden. We also noted that the serene forest that seems to belong to the voice is juxtaposed with the technology barring our paths and infused into our first meeting with the other being.

The Talos Principle has us intrigued, and we're quite interested in playing more when the title arrives this fall on PC, Mac, Linux, and PlayStation 4. 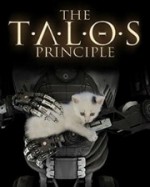