We didn't see any new content for The Order – which is regrettable – but that's not the main thing that I took away from the short demo I played of the game. The expectations of quality from a first-party title are always higher simply because, of any other developer, they are theoretically in a better position to make use of the system. In the case of this title and its developer, Ready at Dawn, that advantage is clear in its graphics and blending of gameplay with impressive cinematics.

I played a segment in the first third of the game where Igraine is pinned down in some warehouses by the Rebels of Whitechapel. A wounded constable, who is not a knight of The Order, is lying unconscious in the street. Playing as Galahad, I arrive, take some cover, and take out the Thermite Rifle. The Thermite Rifle is most effective when you use its primary and secondary fire functions together. The primary (R2) shoots rounds made of an aluminum iron oxide compound, but they don't do a lot of damage. The best way to make them count is by using the secondary fire (R1) to send out an ignition flare. This sets off the dust clouds created by the impact of the compound, burning anyone in the vicinity.

Using the Thermite Rifle, I take care of some rebels taking cover in the windows and balconies on the opposite side of the street. When the coast is clear and after a short cutscene, Igraine and I move forward to pull the constable to safety. Before we can do so, however, more rebels start firing on our position. This not only changes the gameplay camera to a more a tighter, almost over-the-shoulder view, but it also gives a glimpse of the effectiveness of The Order's transitions from cinematics into gameplay.

Apart from a slight pause between the two, there were a couple of times in the demo when it was almost imperceptible when a cutscene ended and when gameplay began. That's not to imply, however, that the cutscenes themselves were stiff or uncreative. Quite the opposite, in fact. The game uses little touches like camera shake to help draw in the player. Similarly, the voice actors do a good job breathing life into their characters.

Once our entire party reaches the safety of a nearby warehouse, Percival reaches for vail at the end of his necklace. In it is Blackwater – the mysterious liquid which allows the knights to live much longer than the average person, and which gives them healing powers. Percival takes a swig to instantaneously heal a gash on his neck. Unfortunately the wounded constable, who cannot benefit from the substance, is dead.

We make our way out the back of the warehouse into more alleys where we're ambushed again by more rebels. The ensuring gameplay is your standard find-cover-and-shoot sequence highlighted by our ability to slow down time momentarily to zoom in and take some more precise shots. After making our way to the end of the alley, our demo ends. It wasn't the longest or freshest demo we've ever played, but it did give us confidence that The Order could be the kind of first-party title that makes the console sing.

For more on the game, check out some of the stories from our cover story hub. 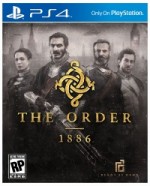