The Legend of Spyro: Dawn of the Dragon I can now see why purple dragons are associated with drug use. In this final installment of the Legend of Spyro series, the player's quest to rid the world of the evil takes a backseat to the tireless battle against the game itself. The longer you play it, the more it breaks and aggravates. Your AI partner has a knack for getting stuck on geometry. The framerate chugs and audio skips rear their ugly heads far too often. Combat is more of an exercise in simply hitting an enemy than doing something cool. Most of the levels require guesswork, which leads to aimless exploration in vast environments. The missions within these areas can be tedious and equally confusing. Long story short, this is a flawed game through and through. Even the most devout Spyro fans should avoid it. 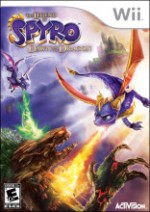 The Legend of Spyro: Dawn of the Dragon
Purchase More Info