Activision is giving us a look behind the scenes of its upcoming title based on Nickelodeon’s The Legend of Korra. In two new videos, you’ll get a peek at the original animation for the cutscenes and the game’s combat.

The first video takes us inside Titmouse, the animation studio that is working on the cutscenes. Titmouse is no stranger to the Avatar universe, having created the title sequence for Avatar: The Last Airbender.

The second behind the scenes video is a look at how Korra’s elemental bending abilities will work in the game. As will likely come as no surprise, she is robbed of her powers early on.

As the player progresses, all four elements (Air, Earth, Fire, Water) become available. Using them will increase their potency over time, and you’ll be able to string them together for extended combos.

For more on The Legend of Korra, check out our recent preview. You can download it on October 21 for PlayStation 4, PlayStation 3, and PC. Xbox One and Xbox 360 players will be able to get in on the action on October 22. A 3DS Korra game is also planned for October 28. 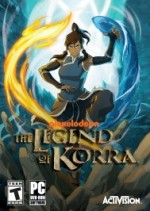