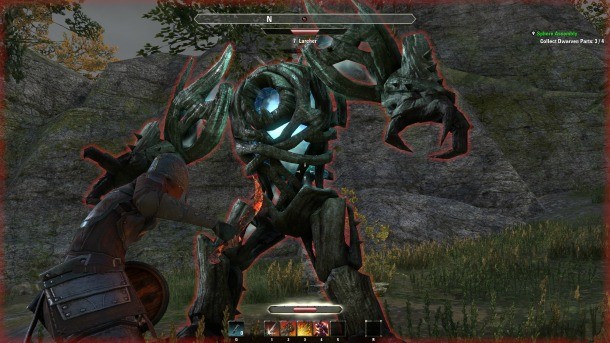 The preview opportunities I’ve had to check out The Elder Scrolls Online (ESO) over the past year-and-a-half have been largely confined to a single beginner area – Stros M’kai. While visually appealing, the areas and aspects of the game that I explored felt stale and linear to a fault. The combat encounters were bland, as were the abilities I had access to. Today I’m going to talk about a more recent preview opportunity that let me out of the sub-par new player experience and into the actual open world of  The Elder Scrolls Online, into the teen levels and the actual game.

Let’s get this out of the way. I think the new player area of Stros M’kai does the game a great disservice by presenting a rather drab introductory experience. I was absolutely delighted to find that this experience rapidly changes as characters move into the world and explore areas such as Daggerfall and beyond. The contrast is a stark one; it’s almost like two different games, and changed my outlook and expectations for this title significantly. This rapid shift occurs for a number of reasons.

First, you actually get the sense of a genuine open world. There are tons of places to explore, actual monsters to fight that require more than button mashing, opportunities for group play, and a feeling of finally being untethered from the handholding of the entry-level zone. Daggerfall is a genuine hub of activity that feels like a real city, not the sterile vendor and repair paradise that many MMORPG town hubs have become. The zone is huge, and players are free to explore as they wish and unlock surprises,quests, and even skills.

Yes, this is another part ZeniMax Online Studios hasn’t really touched upon in the early areas. Players can unlock actual new ability trees through exploration and participation in quest chains and zones, leading to even more customization options far beyond the classic race/class options. Want to become part of your guild (Yes, it’s a lot like Skyrim!) and learn new associated abilities? Go ahead! Want to join a group of tough-as-nails adventurers that plan adventures in the bar? Go ahead! There’s dozens of things to do and experience before you even set foot outside of Daggerfall’s borders.

The experience was overwhelmingly positive in the new areas from levels 10-15 that it honestly feels like two different games. Combat becomes interesting and involved, with many abilities to choose from. Monsters become more exciting than the same humanoid in a cowl shooting fire for three hours. The characters that were annoying to meet in the beginning area begin to ooze flavor. Things get fun and interesting fast.

It’s important to note that this is all still beta and things could change a lot from now to release. I’m hoping that the new player experience doesn’t turn players off to ESO. While certainly we still need to take into account what will surely be some of the biggest factors – endgame and grouping – the areas after around 3-5 hours of gameplay are vastly superior to the trite beginnings and offer a glut of challenges, fun, and exploration.