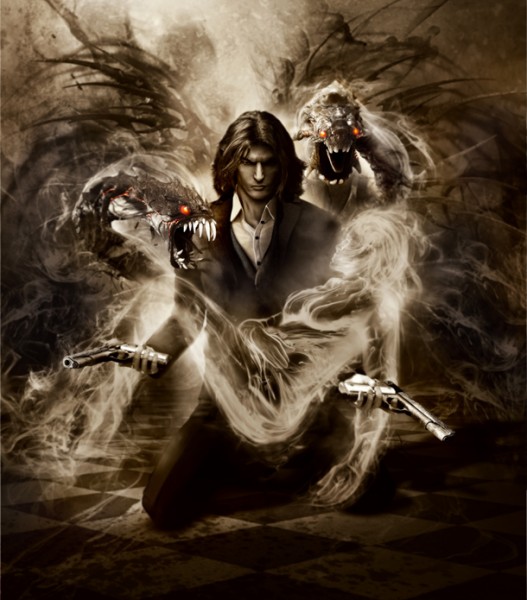 In the two years since the end of the first Darkness, Jackie Estacado has been holding off on using his demonic abilities, not allowing himself to succumb to its addictive power. That all changes when a car comes barreling through his restaurant, killing his two dinner guests and mangling his leg seemingly beyond repair. This is how The Darkness 2 begins, and much like its predecessor, it effectively starts the game off with a very exciting bang. Out of the chaos of the car flying through the wall, one of your men approaches you and offers to carry you out of the restaurant, but you will have to do the shooting because he can’t do both. As Jackie, you are pulled through your restaurant, gun in hand, picking off the mysterious villains who decided that the best projectile to try to kill you with was a car.

Your leg is sickening, with no skin and missing toes, and it’s in full view as your partner drags you through the crumbling restaurant, leaving trails of blood. You make it all the way to the exit in the kitchen only to be blown away by a gas explosion. You can see the alley next to the restaurant care of the giant hole in the wall that the explosion created, and as you crawl towards your escape a man with a cane appears offering only the comment that you seem stronger than your father. He walks out of view and an average thug appears, goading you to crawl toward him.

It’s here that the Darkness speaks up and says, “Use my power or die,” in Mike Patton’s familiar schizophrenic and chaotic pitch, which you’ll recognize from the first game. And then you press “X” to unleash The Darkness. The tentacles extend from your arms, killing the thug who was goading you. The arms lift you up, pull you into the alley, and make quick work of the other men waiting there. Some get ripped in half, and some get the heads pulled from their shoulders. You catch a quick glimpse of the Darkness magically fixing your leg, and then you have control of Jackie and his incredibly violent power.

From there, it’s up to you and the crew of mobsters you command to figure out who attacked you, and why. Your mobster crew doesn’t actually help you in the field. You’re on your own out there, but they are skilled at chasing down leads and finding information that can send you on your violent path. And The Darkness 2 is incredibly violent.

Not only do the bad guys (bad being a relative term in this game) of The Darkness 2 spew about twice as much blood as the normal video game enemy when shot, but using the powers of the Darkness opens up a diverse and grotesque set of instant kills. With your demon arms, you can slice people in half, grab enemies and rip their heads off, or – my favorite – position the enemy horizontally and push one of your demon arms through their chest in a very obvious homage to Alien. You can also use the arms to grab things like ammunition and rip car doors off of vehicles that can be used both as a shield and a decapitating projectile.

After successfully escaping the restaurant, I found myself at my luxurious home. I spoke with the man who dragged me through the restaurant and he offered me some leads about who hit us at the restaurant. I explored my home, making conversation with the assorted hitmen, and even caught two guards saying that their boss (Jackie) was crazy. I confronted them about it, and they quickly changed their tune. Up in Jackie’s bedroom, I found a small shrine that had been constructed for Jenny, Jackie’s girlfriend, who was killed during the course of the first game. He lights a candle for her and says how much he misses her.

On my way out of Jackie’s bedroom, I get confronted by his aunt Sara, who tells me that I need to get over Jenny, that she’s gone now. Jackie reassures her that he is totally fine and perfectly capable of moving on, but she sees right through Jackie and knows that he will never be able to truly move past Jenny.

This becomes even more apparent during the first true level of the game. Jackie sees a ghostly version of Jenny, and runs to catch up with her. Suddenly he finds himself in the diner that Jenny used to work at. He knows this is all an illusion, likely perpetrated by the reemergence of the Darkness, but he doesn’t care. If it means more time with Jenny, even a ghostly illusion of her, he will take it. Jenny and Jackie spend some time together and it reminds me of the memorable moments you spent with her in the first game. It succeeds without feeling like an attempt to simply recreate what happened, and does genuinely feel like an extension of their relationship.

Visually, the game looks closer to Borderlands than the original game. In an attempt to look more like the comic the game draws its inspiration from, The Darkness 2 has a cel-shaded look. It gives the game a stronger sense of color throughout, which is good and bad. The Darkness 2 doesn’t look as drab and monotone as the first game looked from time to time, but I ran into trouble when I didn’t realize that I needed to shoot out lights. The Darkness hates the light, and throughout the whole game you must shoot out lights in order to take full advantage of Jackie’s power. With the game being as colorful as it is, shooting out lights doesn’t make the environment seem that much darker. I found myself walking up to an enemy or exit, only to be thwarted by bright overhead lights that I had neglected to shoot out.

The Darkness 2 is being helmed by a different group of developers than the first game, but after spending some time with the sequel, I see no reason to worry about the new credits. The designers and coders may be new, but the writer of the first game is on board, and the story was one of the best elements of the original. It looks different now, but the brutality, gameplay, and strong voice acting and story have all made it over to the second game. I want to know what happens with Jackie’s continuing struggle with The Darkness, but more than anything else, I want to know what happens to Jenny. Without saying too much, it seems like Jenny will be just as important to the story this time around as she was last time. 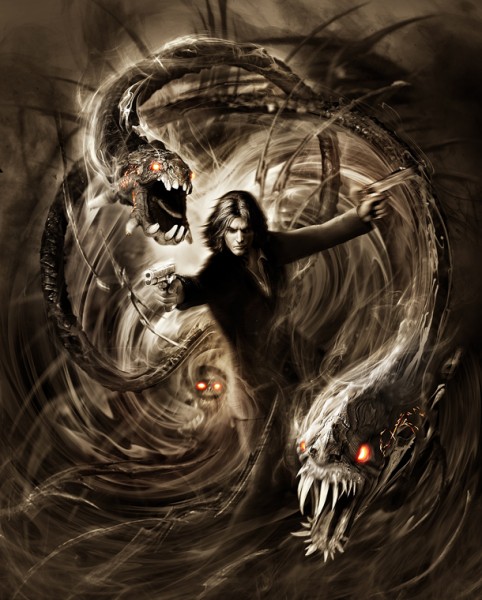 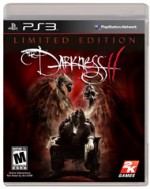