After missing its release in Ubisoft’s last fiscal year (ending March 31, 2014) The Crew is now slated for fall of this year. The title was originally one of Ubisoft’s two new franchises for the new-gen launch window, and the delay of it and Watch Dogs left its mark on Ubisoft’s financial profile.

The Crew is an open-world driving game that emphasizes racing with and against other players. A new trailer shows racing in four different parts of the United States.

The Crew is headed to Xbox One, PlayStation 4, and PC this fall. For more, check out our coverage from E3 2013. 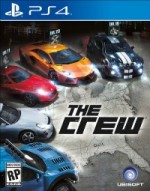