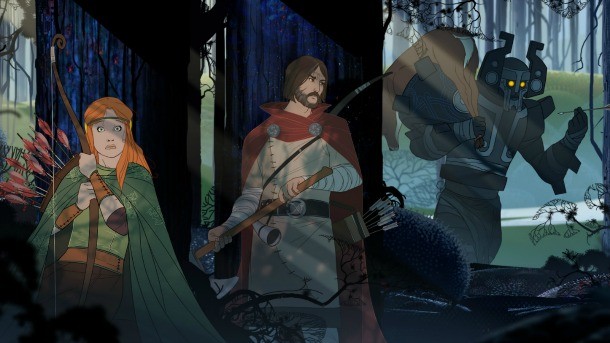 The Banner Saga is one of the best looking strategy games on the horizon, and if you're a fan of games like XCOM or Fire Emblem then you probably already have your eye on this interesting new indie game from three ex-BioWare developers. In order to learn more about the game, before it's release in a few weeks, we sat down with Stoic Game’s co-founder Alex Thomas.

What inspired the development of this game?
Thomas: I think every developer out there has a stable of games in their hip pocket they want to make one day, it's probably why they got into game development. For me, this was always the old turn-based strategy games that started with X-COM and went on to Final Fantasy Tactics, Shining Force and others in the turn-based genre. It also happened that this was something we were able to do with a small team. The three founders of Stoic; myself, John Watson and Arnie Jorgensen, all worked together at BioWare and knew that if we were ever going to do something on our own this was probably the only time we'd get that chance.

Where did you guys come up with the original idea for the world?
Thomas: I left BioWare a little earlier than the other guys and started working on the story and the main design systems. The advantage here was that having complete control over both of these things let us really make them work together. As the story developed we were able to build gameplay around that, and vice versa, so that there was some real synergy between the story that was unfolding and what you'd be doing as a player. I think this is a huge advantage over having a pre-defined genre like “first-person shooter” for example, and then having to attach some kind of narrative to that. A good example of this is that the turn-based genre lets us have a large cast of characters and in response to this we're able to make them come and go, get killed off or make their own decisions in a way that feels like how things would really play out.

What made you turn to Kickstarter for support?
Thomas: We were actually right in the middle of doing our announcement trailer when some friends from a local indie studio told us they had gotten some donations from a modest Kickstarter they ran and they convinced us to make a pitch so we could get a couple extra animations and sound support. We were halfway through building a pitch at the exact time that Double Fine launched their campaign and blew the doors off the crowdfunding model. Suddenly people were expecting our game to be a much bigger deal than we had imagined. When we launched our page we met our goal within the first day and it kept going up from there. We were shocked.

What’s the basic story of the game?
Thomas: We had two things that we wanted to capture – the player was being forced to travel a long distance and deal with problems as they arose, and that they had a lot of people with them, not just the usual “only one who can save the world” kind of scenario. The norse backdrop gave us lots of things to work with, the most interesting is that the end of the world already happened. The gods are dead but mankind survived. Life went on as normal for a while, but something has changed. Old enemies are resurfacing and some kind of blackness is sweeping over the world. The player and thousands of people are running from this destruction and trying to figure out a way to survive. A lot of people think it's another Ragnarok, and there might not be any way to save the world. It's a survival story about a whole civilization.

How will player choice drive the narrative?
Thomas: One of the best parts of having creative freedom on a game is that we can take some risks. We knew early on that we wanted to have lots of characters in the game and we wanted them to have their own motivations. Inspired by stuff like Game of Thrones, we also wanted the freedom to kill them off or give them a will of their own. In addition to this, the player is just one person in a caravan of hundreds – what you say won't always be the final word. You don't have complete control over what happens. It's like trying to steer a boat in stormy weather.
The upshot of this is that you've got a large party of characters who are never permanent and a caravan of hundreds that are going to suffer some hardships. You can try to keep everyone happy and your supplies full but you won't be able to make everyone happy. How many and who survives is part of the journey.

What interesting twists are you adding to the game’s strategy combat?
Thomas: The biggest difference between our combat and other turn-based games is that as allies get wounded they do less damage. Their strength represents their attack damage and their health. Normally this would create a classic death spiral, where a wounded unit becomes less and less useful and the metagame turns into a series of first-hit-wins. We mitigate this by giving each character an armor stat. You have to get through the armor before you start chipping away at strength, and there are many different ways to do this and different strategies for being effective. For the most part we completely avoid random chance, and by the end of a battle it can get really tense having a lot of beat-up warriors scraping for the kill.

Can characters have more than one special skill, or swap out their skills?
Thomas: Each character has a passive and active ability. The passive ability is always there, and usually defines the class in some way. For example, raiders can make a shield wall, so any time they stand next to allies they gain a bonus to their armor as well as giving it to their ally. Active abilities use willpower, which is a finite resource that characters can use to do bonus damage or move further. Most active abilities work in tandem with other characters to make broader team strategies. In addition to these, each character can equip an item, which have unique passive effects in combat. It'd not unlike adding a second passive ability.
When we started designing the combat we knew we wanted abilities to have a distinct value instead of giving the player a long list of abilities, ninety percent of which become useless. What we found out was that players were already feeling overwhelmed with options between the strength/armor/willpower mechanic and having two abilities per character to keep track of. On top of that there are roughly 25 unique characters in the saga which you can use to mix and match teams.

Did you look to any other games or art for inspiration?
Thomas: Early on we had a theme but we weren't sure about the art style. We spent a lot of time looking at different artists, movies and games. We were fortunate enough that Arnie Jorgensen, one of Stoic's founders, is also the artist on the game. Arnie had the idea of an art style similar to the work of Eyvind Earle, who was the art director on Disney's Sleeping Beauty. The second I saw it I knew we had to do that art style. It's something you don't see anywhere else and it turns out there's a reason why: it's incredibly hard to pull off.  Arnie is one of the few people that I think can pull off a style like this and he did virtually every piece of art in the game himself, no small feat.

How big is your team, and what has been the most challenging part of working as a small team?
Thomas: We have three people that have been on the game full-time, the original three founders of Stoic. It's the same three people that are finishing the game! In between we've been able to get some help for sound, a dedicated composer, and some contractors to help push out the multiplayer and extra quests, but otherwise it's been primarily a three-man team.
It has its pros in cons: in general the best part of a small team is that we're very agile and able to make changes at will. The biggest negative has always been the fact that we just don't have the manpower to produce the amount of content that people expect from a modern game in short order. Things take longer. We've put in double-time the entire production cycle to produce an ungodly amount of writing, art and code for three people.