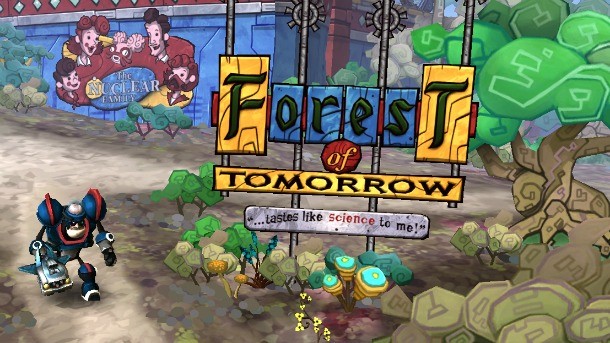 DeathSpank is back, and we spoke with the new game's producer about the big changes in store for the goofy but lovable hero.

DeathSpank was one of the more unusual and exciting new additions to the downloadable scene in 2010. The first games presented a classic action/RPG framework but twisted it by parodying the very game types it was aping.

The team at Hothead is hard at work on a new installment of the series. The Baconing abandons the naming convention of including the hero's name in the title, but it definitely is the next step in the franchise. We spoke with producer Mike Inglehart about the upcoming game, which is set to release in the coming weeks.

For readers new to the DeathSpank universe, what is the storyline of The Baconing? Who is DeathSpank? What situation does he find himself in as the game begins? Where does the story head from there?

Well we should start off with DeathSpank, our Hero to the Downtrodden. He is always seeking out quests to complete in his everlasting crusade of trying to vanquish as much evil as he possibly can.

It is obvious that DeathSpank’s personality is sometimes bigger than the battles that he faces but at the end of the day, he is someone you can count on to help out in any situation and because of that, people tend to look past his flaws. He is quite handy with any real weapon, especially Weapons of Justice and can easily over power hordes of enemies in battle situations. A well rounded warrior, DeathSpank is the poster boy for heroes.

In The Baconing, DeathSpank has already conquered all the challenges he has faced and the foes encountered on his path for Justice. Unaware of the myth of The Baconing, DeathSpank, on this one boring day in Spanktopia, decides to try on all of the six Thongs of Virtue at once. Much to his surprise, the result had nothing to do with chafing or wedgies, but rather the summoning of an evil incarnation of himself, the AntiSpank. Balance can only be restored to the world by entering the Fires of Bacon and destroying five of the thongs. Now, DeathSpank travels the lands to find a sizzling solution to vanquish the AntiSpank and bring about peace once again to Spanktopia.

Again, for readers who may not have played the first game, how would you describe the gameplay in The Baconing?

The gameplay is a very engaging action-oriented RPG experience. The original inspiration for the series is Monkey Island meets Diablo and the core of that vision has been retained, refined and much improved in The Baconing. Players will equip different weapons, items and potions and face a variety of enemies in vibrant worlds populated with useful objects that can affect the battles. In addition to the action, The Baconing also delivers puzzles to challenge the gamer helping to change up the pacing of the game throughout the experience.

Many gamers loved the humor in the first DeathSpank, but hoped for a more robust gameplay system for battles, inventory, and leveling. Are those elements you’ve adjusted or overhauled this time around, or were you happy with their functionality in the earlier games?

We actually spent a lot of time early on looking at the gameplay as a major focus for The Baconing. As you mentioned, the adventure aspects of the product have been the strong points, with lots of laughter, interesting characters and stunning worlds to explore. But along with the adventure pieces comes gameplay and we wanted to really provide a gameplay experience that created a more involved experience for the user featuring both challenge and expression. We asked and listened to our community, who also provided improvement suggestions and in part they have been instrumental in shaping this new game.

We sandboxed our combat quite extensively early on and added in a handful of new mechanics to create more choice in battle which eliminated the simplistic button mashing strategy. Users will now be able to bounce enemies away with a handy Shield Bash, and if you time the Bash just as an enemy projectile reaches your position you can also send the arrow or fireball right back at the enemy with a Perfect Reflect. In addition we have 7 unique Weapons of Justice, each with three gameplay unique levels which users can equip to really send a message to the enemy and 7 unique crossbows all with a risk/reward charge mechanic.

The AI has been improved in the game to create more challenging battle experiences. Enemies attack faster in the game and pose a more devastating threat should they strike DeathSpank, which means players will have to pick their attack windows wisely. For example, ranged enemies will now move in on your position and bring the fight to you if they do not have a clear shot. Aimless button mashing won’t help as a strategy this time around, so we advise people to learn the new mechanics and use tactical thinking to create opportunities to win the battles for themselves. We do have four difficulty levels in the game so players will be able to find the right level of challenge that suits them.  Fans asked us for more of a battle, and the AI will be bringing that fight to the game.

The last main gameplay changes have been with the environments. The fight areas in the previous games were quite flat and wide open leaving little to no tactical choice in battle situations. We have changed all of that up now by adding in cover areas into the game offering areas of protection for the player. This allows players to quickly find a safe haven to drink a potion or eat food without simply continuing to take senseless damage from enemies. These areas can also be useful as you sneak up on a group of enemies, keeping your position hidden and allow you to land a devastating first strike.

Along with the cover areas we have hand-crafted battle areas with a selection of buffed barrels that will create additional points of interest that the users may want to try and manipulate in fights. Players will notice ice, magic, explosive and poison barrels in the battle areas. These can help to turn a fight in your favor quickly if you send a ranged attack into these items when enemies are close by.  But the user also needs to be careful as the enemies could also use these objects against DeathSpank, so stay alert!

We have really made an effort to bring the gameplay forward with these improvements and we now feel that we have a gameplay experience that will offer the perfect complimentary experience to the funny and visually stunning adventure.

[Next up: Why no DeathSpank in the name?] 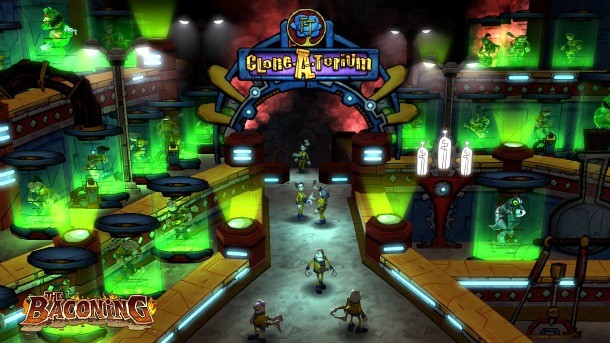 Are there any other changes you’ve made to the game system since the original game and Thongs of Virtue?

We did look at some additional subsystems and the Hero Card improvements were an area we did improve. With the Hero Cards, we wanted players to have to make more compelling choices as they level up and receive these rewards. Each of the cards now carries a gameplay effect that will test your decision making but also will ensure that you feel a difference in the game experience itself. We tuned our potions to create a more balanced system which we feel is now at the appropriate level for the complete gaming experience and we added a new sidekick, Bob from Marketing, into the mix too.

What elements have remained the same? What features are central to the franchise that will return in the Baconing?

Local co-op play is back but we have added a fourth sidekick to the stable. The same charm, humor and character is very much back and at the forefront of The Baconing. The core team has remained together for The Baconing so we have the same funny minds that worked on the scripts, jokes and humorous quests. So the core flow and personality of the game is definitely intact but one thing that people can get excited about is that we have a science fiction theme and direction used as the inspiration for this product with plenty of recognizable references from films and series that we adore. You will see inspirations from Mad Max, Battlestar Galactica, The Jetsons, Tron, Blade Runner and many more.

The core RPG system has remained in place as have the core controls. We really did not want to change something for the sake of it so we were careful when deciding on what to change and what to keep the same.

You’ve removed DeathSpank from the title of the game. What does that say about the nature of this installment in the franchise?

There was a bit of confusion with the first two games being launched so close together last year. Some people still think that the game is episodic, or chronological and that you have to have played the first one to play the second and so on. With the name change, we wanted to clear the air and let people know that you do not need to have played any previous version to enjoy The Baconing. In fact, given the changes we have made, if you are new to the series, we want you to start with The Baconing. To us it is the definitive DeathSpank experience.

We liken the DeathSpank games to the James Bond films. You don’t need to watch GoldenEye to enjoy Casino Royale, so you can jump in at any time and the same falls true with DeathSpank.

As far as this installment goes, just be prepared to see the game take a few more comedic risks, as we at Hothead Games add in our personality to the game.  And let’s be honest, everyone loves bacon so it’s a perfect fit!

Any particular favorite characters or moments in The Baconing that you’d care to share?

Mutoe is by far one of the favorites. He is an edible abomination and also the ambassador to the scientifically ridiculous Forest of Tomorrow. He is a twisted version of Mickey Mouse to some and just plain freaky to others but he is by far one of my favorites. I also really enjoy the cinematic reward we have when DeathSpank becomes a Made Man by the Godfather. If you complete all of the Godfather’s quests in the game, you too can enjoy this classic cinematic cut scene.

What do you think gamers will be surprised about when they play the new game?

Players will be pleasantly surprised to see and hear that we have made changes and improvements to every single area. All of the music has been changed; you will adventure through all new worlds and honestly see a more personality infused experience.  We really have tried to create a fuller and richer experience to bring the game forward and help it evolve into an even better product. Players will be surprised when they see references to some of their favorite sci-fi characters and movies as well.  So in the end, tons to explore as always, tons of cool people to meet and it’s fair to say the entire experience will be full of surprises.