TMNT: Mutants In Manhattan Releases In May
by Andrew Reiner on Mar 14, 2016 at 05:18 AM
Publisher: Activision
Developer: Platinum Games
Release: May 24, 2016
Rating: Teen
Platform: PlayStation 4, Xbox One Platinum Games' Teenage Mutant Ninja Turtles: Mutants in Manhattan is releasing on May 24 for PlayStation 4, Xbox One, PC, PlayStation 3, and Xbox 360. The news comes from a new trailer appearing on IGN.

Platinum's approach to the sewer-dwelling turtles consists of four-player cooperative play. The game's story is written by Tom Waltz, who previously brought the turtles to life in comic-book form for IDW Publishing. 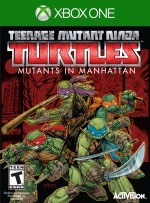