The Free-To-Play RPG Draws From The Heavily-Populated Cast Of The Tales Series
by Joe Buchholz on Apr 08, 2016 at 01:18 PM Bandai Namco's new free-to-play RPG acts as a "who's who" of the Tales series, and is available now on iOS and Android. Players pull off flashy combos by linking together the members of their party with a swift swipe of the thumb.

Tales of Link tasks you with creating a party consisting of nine different characters, and using the game's "touch-link" battle system to connect them for optimal damage. It's set in a world guarded by the "Seal of the Holy Shrine," which, for a name like that, is surprisingly susceptible to demons.

Something called the "Seed of Ruin" inevitably breaks the seal, and now heaven and Earth are in jeopardy. It's typical Tales fare, giving you the heavy burden of stopping a world-ending catastrophe.

You can download Tales of Link for iOS and Android now to start ridding the world of demons, but if the Shin Megami Tensei series is any indication, some demons are actually pretty nice and worth befriending. To hear our thoughts on the last Tales game for the PlayStation 4, click here. 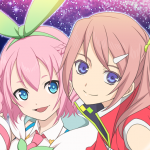