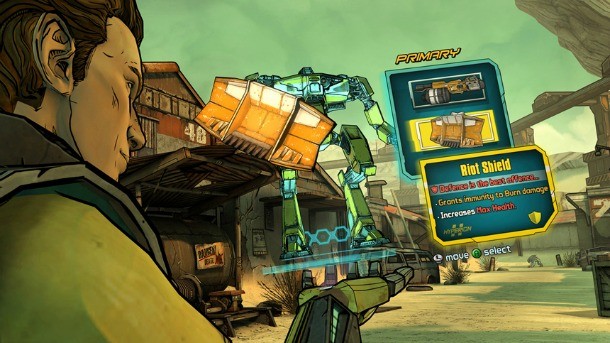 When Telltale and Gearbox announced a collaboration that would put 2K's shoot-and-loot franchise in the hands of The Walking Dead team, we wondered just how the two would be blended. The answer? About how you would expect, and that's not a bad thing.

Our demo put as at the start of the game, as Rhys (one of the two playable characters) and Vaughn touch down on Pandora. The game takes place after the fall of Handsome Jack, and the local population isn't exactly friendly to Hyperion employees. Unfortunately, for Rhys and Vaughn, their paychecks come from the Big H.

The two have been tasked by their boss, Vasquez, to purchase a vault key from someone named August. Along the way, the two piss off a local bandit gang and find themselves in a bloody fight to the death.

Thankfully, a colleague on the Hyperion space station, Yvette, drops a weaponized Loader Bot to defend the pair. The combat will feel familiar to anyone who has played a Telltale game. Nothing has been revolutionized here, and you'll be pointing and clicking to pull the trigger and fire missiles when in control of the robot.

What does differ is the ability to customize the loadout of the robot before it lands. I also noticed that players accrue money during the game, which might mean a trip to a vending machine or a visit to see Marcus.

Where Tales from the Borderlands differentiates itself from Telltale's past work is in the tone and writing. Gearbox is heavily involved in crafting the story, and the writing is exactly what you'd expect: crude and giggle-inducing.

The cast is colorful, and some familiar faces (both alive and dead) pop up quickly. My ending involved a cameo from one of Borderlands 2's vault hunters, but Telltale shared that there are multiple options based on the last dialog choice.

What caught my attention was that the entire demo was actually a flashback, with Rhys serving as an unreliable narrator. It's a literary tactic that has been used in games before (Call of Juarez: Gunslinger comes to mind), but not one that has been bled dry.

There are hints that Fiona, the other playable character, is also not entirely trustworthy. This could have significant impact on how Telltale's decision-based narrative structure works over the multi-episode season (and, in turn, could be the biggest differentiator in gameplay).

We'll know for sure when the first episode arrives this fall. You'll be able to play it on PlayStation 3, Xbox 360, PC, and iOS.