Capcom revealed at Comic-Con yesterday that it's working on a new Strider game. Old-timers likely remember first meeting Strider Hiryu in arcades or the Genesis port of the game. Younger players may know him as the guy with the scarf in the Marvel vs. Capcom series. I spoke with two of the game's producers to answer questions that both camps likely have, including gameplay details and more.

My first question was simple. How should we be looking at this? Capcom says it's not a remake of Strider. Is it a reboot? A reimagining? Fortunately, senior producer Andrew Szymanski and producer James Vance had the answers.

"The best way I can explain it is that it’s the retelling of the classic Strider story," Szymanski says. "The classic Strider story for every Strider game is that that there’s Grandmaster Meio, who’s the big baddie, and he has, through nefarious means, basically taken over the world. Strider, a group of assassins, sends in their best guy, Hiryu, to kill him. That was the setup for the first one, and that was the setup for the second one. The second one actually didn’t have any continuity with the first one. It takes place 1,000 years after the fact and they clone Hiryu and bring him back from the dead – it’s completely insane. So we wanted to avoid any sort of having to create a direct continuity by saying we’re retelling the story for modern gamers."

Grandmaster Meio controls the world by pulling the strings from Kazakh City, a location familiar to players. The references don't stop there, either. Gameplay video from the first level ends with an encounter with a massive dragon. He isn't armed with a hammer and sickle, like Strider 1's first-level boss, nor is he as festive as Strider 2's Chinese Dragon counterpart. He is quite segmented, however, and the robotic beast will likely put up quite a fight. I asked if other bosses will be referenced – the giant robotic gorilla in particular – and was told that we could expect to see something along those lines.

Next, I wanted to know why Capcom went down the Metroid-style road of a large unlockable map instead of a more traditional action game.

"The core concept when we came up with this one was how do we marry the fast-paced gameplay and the action and the acrobatics and the environment traversal that Strider is known for with more of a nonlinear, open-ended, exploratory-based map design, where everything is interconnected and seamless and you’re exploring and unlocking the map as you move along," Szymanski says. "And this is something I came up with when I was working on the concept phase. I really wanted to do a new Strider because it had been so long and I know people want it, but what could we do to make this happen. One of the initial challenges is that both of the first two games were coin-op games, and they were all about quarter munching. They were super difficult so you’d die often and have to keep putting in money. If you played them start to finish, they’re both 30-45 minutes long. How do you take that and turn it into a six-hour console game? Even though we’re a digital download title, we still wanted to have a robust campaign that lasts about that long. You can’t make a totally linear 30-minute game and expect people to enjoy that in this day and age. The idea of bringing in that map design and that larger world you can traverse through, to me, was sort of that aha moment. This is how we do it." Capcom is keenly aware of how powerful the character is, and how important that sensation is to players. At the same time, they needed to find a way to open up gameplay and provide room for variation.

"One of the key concepts was not to take anything away from the character that they know and love," Vance says. "When you begin this game as Hiryu, you have all of his abilities that you know from Strider 1 and 2, plus a couple more. But because we have this expansive world design, you can’t just keep hacking away at this world for six hours with one attack – you could, but it wouldn’t be a very enjoyable game. Part and parcel to that, we created a lot of abilities that play to the character’s core design. We don’t want to give him a gun instead of his Cypher – he’s always going to have his Cypher, and he gets a fire-based Cypher for example. We’re playing off these kinds of adaptations of the core weapon set that he has, plus there are a bunch of other things like a robot option that can help him, and maybe there’s something more there. And there are a couple more abilities that we can’t talk about yet, but I think that they’re really inventive and really open up the world for the player."

"A lot of games of this type, when they start you’re fully powered, and then a couple minutes in they take all your powers away and you have to find them," adds Szymanski. "We didn’t want to do that. We wanted to have him be fully badass in the beginning and have him get more badass as the game goes on. So you can do everything that you could do in the old  games from the opening moment, and then it just goes over the top from there. We struggled a lot to how to do variety. We had absolutely no issues with traversal, because one of the points of the original Strider game was that it was one of the first side scrollers where you could grab ahold of nearly anything and climb any surface. All of those are still in there. That’s a no-brainer. But how about attacks? Because the first game only had one Cypher attack, and you spammed it just constantly. But we didn’t want to give him other weapons, because that would break up the silhouette, and it’s such an iconic silhouette with his Cypher. That’s how we came up with the idea of changing the properties of the Cypher – we’ve shown the explosive one, and there are more that we’ll be showing as we go along that basically allow him to do different attacks and do different types of environmental interactions." What about players who know Hiryu from his appearances in the Marvel vs. Capcom series? Did any of his moves from those games make it into his latest game? Younger players might have expectations about the character that don't necessarily line up with the Genesis days, after all.

"That’s something that we also took to heart when we were designing the character," Szymanski  says. "First of all, the character himself includes elements from all the previous games. It’s a brand-new Hiryu character design that’s been slightly tweaked. It’s kept the iconic silhouette, but some of the details are different. It was done by one of our artists in Osaka who’s been doing most of our character designs, and he actually did the character designs for Strider 2. So we have the pedigree there that’s doing all the work. The plasma scarf, instead of being a piece of cloth is now an exhaust vent, which is where his excess plasma energy trails behind him. That’s the biggest character change, but we’ve also incorporated some changes from the Marvel vs. Capcom character models as well.

"We wanted to have his core moveset from the original games, so everything you could do in those games you could do in the new one, but a lot of people do know him from MvC. So he’s got a launch move that he can use to launch people up – that’s straight from MvC. Forward and jump is the cartwheel jump that everyone knows. When he jumps straight up, it’s inspired by the animation from Marvel vs. Capcom, as well as the robot option implementation."

Wait a second. So the scarf isn't a scarf anymore? It's some kind of plasma thing? Explain.

"The setting behind the character is that he’s a Super A class of the Strider organization, which is super rare," says Vance. "He’s the top of the top, cream of the crop. The sword he has is special, because unless you have a certain level of psychic ability – like your chi – if you swing the sword, nothing will happen. But because he has that ability, when he swings the sword it gets an extension of the plasma energy. He’s so badass that even when he uses his sword, he still has plasma energy to spare within his mind, and it comes shooting out this funnel in the back of his neck, which becomes this cool-looking jet. We also use it as a UI element in the game, because when you change your plasma type, the scarf will also change to a different color. He keeps changing his mindset, so now you can see the difference."

Players can switch between his various Cypher types by using the d-pad and get immediate visual feedback based on the scarf's color. Regardless of whether or not it's something that can be tossed into the wash, it's a clever way to keep players' attention focused on the character (and the action) and not have to dart their eyes around looking at an icon.

Finally, does the entirety of the game take place in the city?

"We’ve taken the surface of Kazakh City that actually appeared in both previous games and then expanded it out to be Meio’s home base," Szymanski  says. "It extends deep underground, it extends into bunkers, and various military installations, as well as Meio’s actual residence. Even though one of the classic parts of the old games was this type of globe-hopping nature, where one minute you’re in Kazakh, next you’re in the Amazon, and then you’re in Siberia, that was really cool, but that doesn’t mesh well with the idea of interconnected space."

Look for Strider on the PC, PlayStation 4, Xbox One, PlayStation 3, and Xbox 360 on their respective digital marketplaces in early 2014. 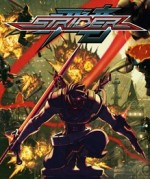