Street Fighter X Tekken is coming on March 6, across the usual variety of platforms. Sony fans have a few convincing reasons to stick with the PS3 and Vita versions, as this new trailer shows.

As mentioned earlier, Pac-Man is joining the roster, taking control of the classic Tekken character Mokujin. Mega Man is also getting his fight on, though it's not the version fans may have been expecting. Remember the paunchy, pistol-packing version of our hero featured on the hilariously bad NES box art? Well, he's in the game.

For more info on the game, check out our recent video feature, where we took on the game's producer, Yoshinori Ono and his assistant producer, Tomoaki Ayano. 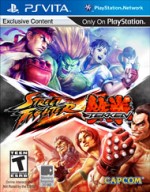