Few video game series, and few fighting games in particular, have the history and cultural cache that Street Fighter boasts. Even after occasional missteps, the series commands the attention of the entire fighting game community, carrying the banner at nearly every major fighting game tournament under the sun.

It is with this legacy in mind that Capcom is releasing Street Fighter 30th Anniversary Collection, a bundling together of multiple versions of older sprite-based Street Fighter games, with a few having been retrofitted with online play. The collection pays homage to the venerated fighting game series while trying to bring the virtues of the older games in front of a modern audience. Each game is pulled straight from its arcade version, even including the name of the hardware on the menu when selecting the game. It does mean that, if you are a fan of any specific eccentricities of a console version, you may not see them repeated in the Collection.

All the games featured the same filters if you choose to use them, labeled TV and Arcade. Both emulate scanlines, while the arcade is a bit dimmer to represent being recessed into an arcade cabinet. Players can choose to play with borders which often differ by game, stretch the image, or fill the screen. The option to just turn off all the filters, borders, and stretching exists, too.

The Switch version also has an exclusive mode using Super Street Fighter II's tournament mode, letting players with multiple Switch units put them into table top mode and play musical chairs by physically moving to the right unit for the next fight. While this does let the tournament move fairly quickly by making the fights proceed concurrently, it can also be kind of a confusing mess figuring out which system and controller you need to be at for your next match.

Fans of Street Fighter history will appreciate the museum mode, which features unreleased art, a timeline of all the releases in the series, and character profiles. You can even dive deep into individual characters and see their animations or comparisons of all their sprites across games.

Street Fighter 30th Anniversary Collection is releasing on PlayStation 4, Xbox One, Switch, and PC in May. 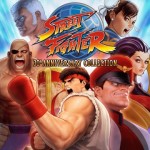