Dog Eat Dog has announced a new title that blends elements of classic 2D shooters, their 3D successors, and a touch of Mega Man. Stellar is coming in 2016, but if you’re attending PAX South, you can play it there.

In Stellar, players take on the role of an alien seeking to expand his race’s dominion throughout the universe. The game procedurally generates the star systems in each playthrough, giving the title a roguelite feel.

As you defeat the leaders on each planet, you’ll be able to incorporate their technology into your craft. The player isn’t defenseless at the start, though.

While the exploration takes place in three dimensions, players will be able to switch the perspective to two dimensions. This fixes enemy craft on the same plane as the player’s ship and makes the game more akin to a bullet hell game. You can choose between a side-view and a top-down view.

You can check out the introductory trailer above. The title is planned for release on PC in 2016 and will support Oculus Rift. 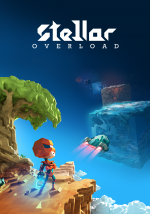