The multiplayer beta for StarCraft II is in full swing, and I've been spending every bit of free time plugged into my Command Center. It's far too early to make any judgments about balance or get a reading on the eventual face of the revamped Battle.net interface, but the beta tell us many things regardless.

Cynical types would have you believe that StarCraft II is little more than a unit overhaul and a graphical refresh of the original game. While it's true that many core mechanics carry directly over to this sequel, once you dig past the top layer, the gameplay has several substantial differences.

The interface remains largely similar, but a few tweaks make a lot of difference. The twelve-unit selection cap is gone, making managing large forces less frustrating. Multiple buildings can be selected (and hot-keyed) at once, allowing for easier production management. Flying units have a small tracer displaying their relative position on the ground. Simple abilities can be set to auto-cast, à la Warcraft III. In sum, all the small changes bring StarCraft II up to modern RTS standards while retaining the small-scale micromanagement philosophy that defines the franchise.

The factions are even less symmetrical than they used to be, with their signature abilities further integrated into their play styles [see following pages for faction-specific breakdowns]. More units, more abilities, more counters, and new map features diversify the gameplay from match to match. It'll take some time to familiarize yourself with the dozens of strategies that each faction can employ. Add mixed-race teamwork, and the possibilities explode.

Also taking into consideration the Battle.net relaunch with its integrated social networking features and supposedly improved matchmaking, StarCraft II isn't doing anything to disappoint so far. Nevermind the delays; if the game improves as much for release as it has since the last time I saw it, the wait will be worth it and then some. As in the original, Terrans are the middle-of-the-road faction, falling somewhere between the numerous-but-weak Zerg and the expensive-but-strong Protoss. The Terran early game is much different this time, though, thanks to the addition of new infantry types. Marines are just as you remember them, but the cliff-ignoring, close-combat Raiders are an unbelievable harassment unit in the hands of an expert. Many maps have starting bases on elevated plateaus, giving Raiders a quick entry/exit over terrain impassable to other units. More than ever, you have to guard your workers against a Terran opponent. Marauders are the other new infantry unit, and these heavy assault troops serve as a fantastic counter to any early/midgame vehicle rush.

Late game, Terrans can drop their signature nukes on enemy bases, and the high end of Terran power is more terrifying than ever. In my experience, Terrans have an easier time switching gears mid-match than the other races do, as they rely less on researching a bunch of specialized upgrades and more on a diverse set of units. The transforming Viking aircraft/assault mech is a perfect example of this adaptability.

With the Science Vessel replaced by the turret-deploying Raven, Medics removed, and the addition of new beefy infantry and aircraft, Terrans are more straightforward than the other factions. They're no less deadly, though. The swarming insectoids have a bunch of new tricks up their carapaces in StarCraft II. Burrowing is even more central to the Zerg playstyle, with Roaches gaining super-regeneration underground and Infestors able to move while burrowed. The biggest change is to the early game, where Roaches provide a weaker but cheaper and earlier ranged option than Hydralisks (which are relatively larger now). Banelings can counter any massed ground assault with their suicidal explosions.

Base defense is much different. Zerg defensive turrets can now uproot and relocate like Ancients in Warcraft III, though they lose any offensive capability while mobile. Between that and Queens being changed to a purely defensive unit that empowers Zerg buildings and can speed up Larva generation, Zerg can reasonably turtle and boom to their high-end units more effectively than before.

My favorite StarCraft II unit at the moment is the Zerg Brood Lord, which replaces Guardian Aspects as the faction's ultimate flier. Rather than attack directly, Brood Lords spawn and fire short-lived Broodlings, which as before are like crappy Zerglings. They make a lot of them, though, and like Carriers are able to stay out of harm's way while their minions do the work. The Protoss feel the most changed to me. Zealots are still their early-game mainstays (and their new Charge ability is awesome). The permanently cloaked Dark Templar are still hilarious when your opponent isn't expecting them, as well. However, the Protoss have gotten far trickier thanks to a renewed focus on their psionic abilities in StarCraft II. Psi Storm is just the start of it.

Stalkers, which partially replace Dragoons as your primary early Zealot support, can give opponents fits with their short-ranged teleportation. Sentries are available right off the bat. They can slow enemy units or shield your own, and can be upgraded to distract your enemies with phantom units via Hallucination. Finally, the Mothership replaces the Arbiter. More expensive than a Battlecruiser, the Mothership can bend time and gravity to disable enemies and passively cloaks nearby friendlies.

Most interestingly, Gateways can go into Warp Gate mode and build units directly onto any powered (via Pylon) area of the map at the cost of slower builds. Instant assaults and reinforcements change the course of a match very quickly.

Though they're not lacking for strength, the Protoss have more potential for deviousness and misdirection than even the Zerg. 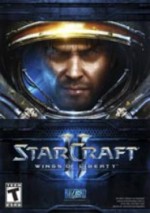