Supercell’s Clash of Clans has inspired a number of “homages,” but few have managed to be quite as sticky as the original. The latest challenger has the Force on its side, though.

Star Wars Commander gives players control of either the Empire or the Rebel Alliance during the Galactic Civil War. Players will build a base, train units, and base invasions against the computer or other players.

The game takes players across locales from Episodes IV - VI with either the might of Imperial AT-STs, AT-ATs, and other machines for war or the heroes of the Alliance like Han Solo and Chewbacca on your side.

Star Wars Commander is available for iOS devices now as a free download, with in-app purchases. 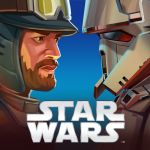