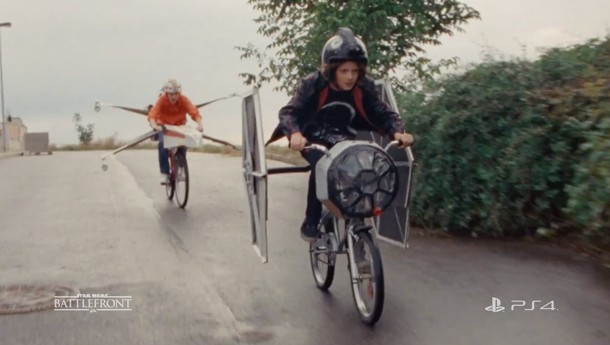 People aren’t just coming to Star Wars Battlefront for the gameplay. They want to relive the Star Wars experience.

As we’ve watched the game’s evolution, it’s become clear that EA and DICE aren’t aiming for the depth of the Battlefield series. Much of Battlefront’s gameplay is streamlined for accessibility, and with an enormous license and faithful following, that makes sense.

Star Wars Battlefront’s biggest feature isn’t the gunplay or the modes. It’s that it looks and sounds exactly like the movies.

Given that nostalgia is the game’s biggest draw, it makes sense that a marketing campaign for the masses would highlight that above else. There’s no gameplay in the new commercial, and for those like the commercial’s lead character, that’s just fine.

People want something different from their Star Wars experiences, especially with The Force Awakens coming to theaters in just two months. If you were wondering why Battlefront is eschewing the depth of DICE’s other shooters for a throwback approach, it’s to make sure that as many people as possible can log in, fly an X-Wing, and leave with a smile on their faces.

Star Wars Battlefront will be out on November 17 for Xbox One, PlayStation 4, and PC. For more, check out our impressions from the beta.