You can check out the extended demo below which features both the traditional on-foot exploration and shooting, as well as zero-g shooting. The first-person shooting aspect of the game is being developed by the studio, Illfonic. 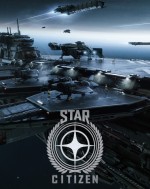