Soul Calibur IV was a solid entry in Namco’s successful fighting series, but fans were split on new mechanics like the Soul Gauge and Critical Finishes. After spending some time with it at a Namco event prior to the Tokyo Game Show, I’m confident that Soulcalibur V is taking the series in the right direction again. A deep roster, new mechanics, and some gorgeous visuals point towards the upcoming sequel being one of the best entries in the long-running franchise.

When they showed the game off at E3, Project Soul revealed that the roster would consist of half new characters and half returning characters. This results in a character select screen of longtime favorites and some great new additions. When I asked the producers about the roster size, they couldn’t give specifics but rather hinted that the number of slots of the select screen would give me a good idea. I counted 32 spots, resulting in one of the biggest rosters in Soul Calibur history.

New additions Z.W.E.I. and Natsu were revealed at Comic-Con, and the mysterious Viola is Namco’s TGS reveal. Outfitted with a claw on one hand, she doesn’t seem to have the most intimidating melee weapon in the game. However, her crystal ball should prove more useful than her short-range claw attacks. This glowing orb can be placed anywhere on the battlefield, and you can try to lure your opponent into them as if it were a land mine. You can also summon it back onto Viola’s person, and it’ll cause damage to your opponent if they happen to get in its path. It can also be used in various throws and standard attacks, so it should be a key part of Viola’s offense.

Z.W.E.I.’s attacks featured both a cross-style sword and a werewolf that can be summoned. This pet of sorts isn’t on screen most of the time, but he’ll appear during specific attacks and deal damage to opponents. Natsu is a female ninja, and her attack style is very similar to her mentor Taki. With leaping jumps, lightning-fast attacks, and the ability to teleport and create shadow clones, she features some of the most flashy offense in the game. Taki fans should love this new character, as they’ll feel comfortable with Natsu’s more powerful (yet instantly familiar) moveset.

Soul Calibur has featured many guest characters in its history, including Link, Spawn, Heihachi, Yoda, Darth Vader, and The Force Unleashed’s Apprentice. Namco promises a big surprise for Soulcalibur V, and they’re even planning a special event strictly for the reveal.

The critical finishes and soul gauge systems from IV weren’t exactly beloved additions to the series, and they’ve been removed for V. In its place is a new Critical Edge system, which gives each character a super move not unlike Street Fighter IV’s ultras. As you progress through rounds, a meter near your life bar will charge. When it’s half-full, you can pull off more powerful versions of standard attacks that are called Brave Edges. Once completely full, the Critical Edge is available. These are blockable attacks for the most part, and they’re devastating maneuvers that can quickly turn the tide of a battle. They’re not long sequences like the Critical Finish moves from IV, and they’re easily performed with two quarter-circles and three simultaneous attack buttons regardless of your character.

All of the action and characters are gorgeous, and the stages I saw looked equally impressive. The development team is going with animation this time instead of their usual motion capture method, and they’re working in conjunction with animation team Cyber Connect 2 (who previously worked on the Naruto games). Bouts are silky-smooth in terms of both framerate and animation, and it’s easily one of the best-looking fighters I’ve seen.

I’m always excited when a new Soul Calibur is on the horizon, but my time with the game has me more excited for it than any entry since the amazing 1999 original. Anyone with even a passing interest in the genre should keep an eye out for it when it launches early next year. 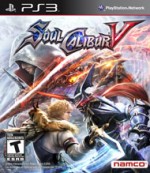