Sicilian Holiday – Hunting Nazis In The Picturesque Bittani Village
by Ian Boudreau on Dec 01, 2016 at 05:30 PM

When we last saw Lt. Karl Fairburne, he was causing problems for German tank production plans in North Africa. As Sniper Elite 4 begins, Fairburne and his collection of rifles find themselves in nearby Sicily, where the local militia is fighting Nazi occupation. This means it is Fairburne’s job to thin out the local Nazi population, primarily by means of Sniper Elite’s signature long-range shooting and cartoonishly gory slow-motion kills.

I explored the game’s second level, Bittani Village, for about an hour to get a sense of what has changed for Sniper Elite during its transition to current-gen exclusivity. Prior to beginning the level proper, the first big change from Sniper Elite 3 is front and center. Fairburne now has a hubworld to return to between missions where he can talk with resistance NPCs and fellow OSS officers who provide tips and intelligence about the area ahead. One character suggested looking around the church cemetery, while another warned of a dangerous German sniper. These tips and optional objectives are penciled onto your map when you set out on the main mission.

Once I arrived in the true mission area, the action became familiar. I could see Nazi patrols at the edge of the village as soon as I stepped off the dinghy on Bittani’s nearby beach, and I had the choice of whether to start shooting right away, eliminate them quietly, or sneak around. Fairburne carries the standard loadout of rifle, submachine gun, pistol and knife, as well as a selection of grenades or mines.

While it is possible to charge ahead guns blazing, it’s usually not a great idea. Enemies can hear gunfire from a long way off and will investigate in force when it sounds like bullets are flying. Fairburne can use this to his advantage, though, by leaving mines and tripwires in likely paths before causing a ruckus.

The third Sniper Elite featured more open levels than its predecessor, and Sniper Elite 4’s Bittani is a further improvement. Bittani is much larger than any locations in earlier games, and there are far more possible paths through it. I started the level on a small beach and in the distance I could see a large church, and several large plazas. There’s a ton of verticality to the level as well, as Bittani rises from the shoreline up along a hillside.

After creeping through Bittani and helping the anti-fascist Partisans fight off a German attack on the church, I headed east and out of town. I was worried about moving around much with that enemy sniper on the loose. The eastern road led out through a large archway, passed a vineyard and over a bridge across a steep sea inlet. Pulling out my binoculars, I spotted the likely sniper nest: an old three-story stone watchtower that overlooked the beach below. Two German soldiers were standing near its base, chatting and oblivious to my approach. Crouching behind a handy bush, I dropped the first with a bullet through the neck, and the second barely had enough time to squeeze off a couple rounds in my direction before he was down as well.

The approach to the tower was unguarded now, so I slunk forward, keeping to shadows. A final panicked dash from the woods to the tower’s base and I was out of the danger zone. Inside, the rickety stairs had rotted, forcing me to climb the outside walls to reach the top. Once I managed to pull myself up, I saw that my rival sniper hadn’t seen me coming at all. He was scanning the shoreline far below. Careful not to make a sound, I inched up behind him and planted a knife in his neck. Danger eliminated.

The sniping is still the main draw and Sniper Elite’s over-the-top X-ray death camera is back in force. The game rewards good shooting with a slow motion trip alongside your bullet as it travels from rifle muzzle to the opposite side of an enemy cranium, smashing jawbones and eyeballs on the way. Close-up stealth takedowns now can trigger this gruesome X-ray vision too, but as with the game’s aim-assists, players can adjust or disable this feature if it proves to be a bit too much.

Sniper Elite 4 doesn’t seem to be making massive changes to the series’ established formula, but the adjustments it does make – bigger environments, a more open world – all look like improvements. The game will be available on PlayStation 4, Xbox One, and PC February 14. 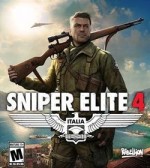