The first male character for the indie fighting game Skullgirls Encore received a new trailer today, via a post on the PlayStation Blog. Big Band is joining the fight for free on April 22.

Big Band uses a variety of music-based attacks by attacking with myriad different instruments. The post by CEO of Lab Zero Games Peter Bartholow descries Big Band as a “high risk/high reward sort of character,” that is able to dish out tons of damage, but leaves himself open to attacks while doing so.

On April Fools Day, a new character named Fukua – humorously introduced as a clone of Filia– was introduced. Bartholow states that, “the joke was that Fukua wasn’t a joke,” and she is currently being tested in the PC beta. Skullgirls fans can expect Fokua to hit the PlayStation 3 version in the coming weeks for free.

There is another free DLC character coming to Skullgirls Encore, and the blog post gives a sneak peek at her. Eliza is an Egyptian-themed lounge singer who can manipulate blood and has a parasite instead of a skeleton, which can leap from her body and attack opponents. She is still in pre-production, but a gallery of her animations was included in the post on the PlayStation Blog.

Sadly, there is no news yet on when Skullgirls Encore is coming to the Xbox 360. Skullgirls was taken down from the PlayStation Network store and Xbox Live store last year when its co-publishers parted ways. According to a recent tweet from the Skullgirls twitter, it is trying to get approval from Microsoft for the 360 version. Another tweet reveals that Microsoft was wary of legal issues with Skullgirls, and the developer needed to halt testing to fix an issue.

But don’t worry, not all hope is lost: a third tweet from the Skullgirls’ twitter account teases that news about “other platforms” is coming very soon. There’s no word on if this is in reference to the 360, or if Skullgirls Encore is going to appear on a new platform – such as the Xbox One or PlayStation 4.

Skullgirls Encore is currently available for PS3 and PC. Its previous DLC character, Squigly, is free until May 6. 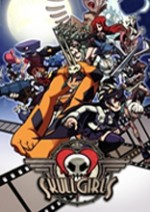