We recently spoke with SimCity lead producer Kip Katsarelis about the new multiplayer components headed to the series and much more.

Want to create a college town? Maybe an industrial wasteland? The new SimCity encompasses these archetypes and many more. They all serve an important purpose in the new multiplayer system in which towns work together to share resources and build "great works" together. Read on for more details in this promising SimCity reboot. (Interview conducted by Joe Juba.)

Can you give us a general overview of what the multiplayer component of SimCity is and your goals for it?
Multiplayer is a key focus of SimCity, and players are part of the SimCity world. Everything you do at your city level and your region level bubbles up, and you’re all connected through leaderboards, through global markets, and through challenges that you can compete in.

Cities in a region work together on what we call “great works.” For E3, we had a great work – the international airport – that we showed off. There are three cities in that region, and in SimCity, cities can specialize. So there’s going to be several archetypes of cities you can build. There’s the tourist city, which is going to be really focused on bringing tourists into your city. And there are leaderboards tied to each one of these city archetypes.

Are these archetypes something you select at the outset, or do they arise out of the way that you play your city?
We’re definitely going to surface those city types to player up front. You’re going to be able to pick your path as you play along. Some of it is determined by your starting city. The other city is really focused on harvesting coal and resource gain. That city’s going to look different, play different – they’re actually playing this resource-management game where they’re building coal mines, and they’re either going to sell that coal on the global market, trade it with other players, or turn it into manufactured goods. They’ll be able to smelt it into metals or use it in their coal plants.

And these different city types can work together to build larger works?
Yeah, we have great works within a region. The cities are all situated in a region, so think of it as a map, and there’s going to be some number of cities within a map. We’ll have some that are small, two- or three-city maps with a single great works site where players can choose which great work to build. They’ll have leaderboards, so the coal player has their own leaderboards, missions, and achievements. Playing alone, you’re only going to get to a certain level. Your coal business and your city are only going to be so successful. Working on these great works together, that’s going to put you into the upper echelon of those cities and boost you. An international airport, for example, will allow the coal player to ship goods into and out of their city. For the tourist cities, without it, you can only get so many tourists into your region. Even though you’ve got your sports stadium all set up, your public transportation networks set up to funnel the tourists in, but you’re going to need that international airport to really pull in the tourists. That’s going to help you out on your own quest for success in the tourist game.

When the airport is completed, does it exist physically in the city?
In this case, you’ll see the local airport. You can have local airports in your cities, but there’s an international airport that exists outside your city. It exists in the region, and everyone connected to it can benefit from it. There’s a whole game there of just building. You’re crafting your city, you’re shaping your region, you’re collaborating with your friends building this great work. There’s a ton of gameplay just building it, and you’re going to see who is contributing to the great work. Who’s contributing workers to it? Who’s contributing materials to it? Who’s doing the most? Whoever achieves the most at the end is actually going to earn an extra achievement for their contribution. Once it’s completed, then there’s going to be gameplay afterwards and benefits from those great works, and you’ll have different types of great works to choose from.

These great works cannot be built if you’re trying to play a single-player game?
Our single-player is still considered multiplayer, because everything you do, you’re still part of that SimCity world. You could play by yourself in a region, but play multiple cities. So it’s really about the number of cities that it takes to achieve something like that. And, of course, playing with other players, there’s going to be some social reward mechanics there the more players you have. And it’s going to be quicker to get things done.

So it is technically possible to play single-player if you don’t want any outside interaction?
Yeah. We’re definitely catering to different playstyles. We know that there are quite a few SimCity players who do want to play alone. When you create your region, you could just set it to private and play any one of those cities by yourself. You’re jumping around between the cities and playing that way. And later on, if you want to invite a friend, you can invite a friend to your game if you’d like.  We’re going to have a matchmaking system, so you can just hit play and we’ll put you in a region with other players, and you can play that way as well.

Players have the matchmaking option available, but they can also choose specific people to play with also?
Definitely.

What other kinds of city-to-city interactions are available?
Trading is definitely important, especially given how unique the cities are. For the coal city, that player is really crafting the city around the coal industry. It’s the economic center, the heart of that city. That game is about zoning lots of industrial and commercial. You could go residential too, but why not have another city that requires lots of residential? They could build a city that’s all residents, and their residents could come to your city and work there. Both players benefit.

There might be some cities that don’t have any water resources, so they’re going to need to get water from someplace. You might have another city that’s full of water, and they can contribute water to their neighbors. Services are another thing. You could supply fire coverage, police coverage – because crime is going to a problem for some players, as well.

There’s also going to be negative impacts, too. There could be some cities that are producing lots of pollution, and that pollution is going to spread out from that city and impact the region. Crime is going to spill out, also.

Is it possible to jump into other player-controlled cities to check it out and see how a different kind of city operates?
Yeah, you can check it out. We call it spectator mode. You can hop over there, load it up, and see it. That’s their city – you won’t be able to build anything – but you can definitely view it.

Was there a point in development where you considered a simultaneous multiplayer, like two people building the same city at once?
We talked about it, but that’s not the core experience we felt players were after. We’ve done some research on that, it’s come up, but that didn’t seem like the primary motivator for players.

Is there any definition to the space between the cities? Is the region something with landmarks you can see?
It’s a map, and we create the maps. Every city is placed. You’ll have an area, a playspace, that you’ll be able to build up, but you won’t be able to build into the region. The region is visualized; you can pop out to the region view, and you’ll see your city alive, and highways connecting the cities, and traffic flowing back and forth, so the region feels like an extension of your city. You’re going to look out from your city into the region and see other cities off in the distance. You’ll be able to see a great work if it’s close to your city. You’ll see your sims traveling to work. You’ll see airplanes landing at the airport.

Is there any discussion about connectivity between the SimCity series and The Sims series?
There’s always talk about that. We’ve done that in the past. In SimCity 4, we had an “import your sim.” We’re not planning anything like that at the moment.

Since SimCity is bringing several players together, how does that affect cheat codes? Entering a code for extra money previously only changed your own experience.
Cheat codes are a big part of Maxis games. We’re still kicking around ideas on how to integrate those and the best way. When you’re talking about online, be it collaborative or competitive, you want to make sure people are on an even playing field. We want to satisfy that casual sandbox play, but also that competitive online play as well. So there’s still some work there we’re discussing on our end.

What else can you tell us about the reward systems for players?
We have several levels. We have a mission structure, so you’ll be able to complete missions within your city. Very simple, “put out 10 fires with your fire station” style missions. We have larger, collaborative missions where players are going to work together at the region level. The international airport is an example of one of those. Then we have challenges, which we call global challenges, and there are two types. We want to release those on a weekly cadence, where we’re providing new challenges, and you’ll opt into them automatically. There will be ones that you compete in at an individual level. “Pollution in the SimCity world is at an all-time high.” We want the players to be aware of that, and we’ll try to reduce the global pollution by 10 percent, let’s say. You’ll have a week to do that, and there’ll be an achievement for completing that. And then we have regional challenges, where we might want 10,000 airplanes to launch this week. You’re going to work together on a regional level and be judged as a region, and there’ll be unlocks and achievements around the regional and individual missions. We’ll have your basic achievements, and we’ll also have in-game unlocks.

Is there an element of user-created content and sharing in city customization?
We’re not committing to any of that at this time, but we know that is part of Maxis. In SimCity 4, a lot of those tools were released pretty much a year after launch. So, definitely on our minds, but I can’t promise that we’re delivering on any of that right now.

SimCity requires an always-on online connection. How does that work if players just want to play solo?
We are building a multiplayer experience. That is our goal. We want players to play together. We’re making the missions, adding leaderboards, things like that. This is a collaborative online experience. We’re going to be delivering content like challenges as the game is live. That’s the experience we’re after. If you want to play solo, we’re going to give you those opportunities, but you’re still part of that SimCity world. We want players to feel like that they are part of that, and that their actions at the city level ripple up and that world is being broadcast back down into your city and your experience.

We have a ton of data. We know what the pollution levels are. We know how much garbage is being produced. We know our education level, our crime levels. We want to surface that. 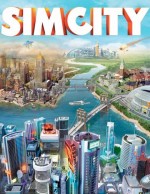