Shantae: Half-Genie Hero Gets An E3 Trailer, Playable Demo Goes Out To Kickstarter Backers
by Kyle Hilliard on Jun 10, 2015 at 04:16 PM WayForward's Shantae: Half-Genie Hero was successfully Kickstarted back in September of 2013, and a portion of the game is currently in the hands of backers.

You can see some gameplay from the game in the E3 trailer below, whose visuals surpass those of the recently released  Shantae and the Pirate's Curse for 3DS (read our review here).

To get your hands on the playable demo, which covers three levels of the game (with spoilers removed) you had to back at the early access tier, which was $45 or above. 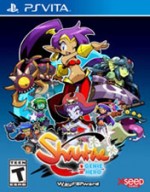