Volition released the newest trailer for Saints Row IV last week, and I had the chance to play a half hour of the game at Deep Silver’s E3 meeting room. As expected, the sequel proves to be loud, ridiculous, violent, and gleefully stupid. It’s also a ton of fun to play.

The demo was split into two sections. I began with an early campaign mission that establishes the player as the acting President of the United States. As he strolls through the White House, the president gets briefed on the state of the union, passes cabinet members as they smoke weed, greets strippers holding trays of booze, chooses between a bill to cure cancer or another to solve world hunger, and punches a jerky congressman in the crotch. After that, things get silly.

During a press conference, aliens attack the White House and begin abducting members of your cabinet. Retreating to the Oval Office, you grab a gun from the wall and begin blasting your way through the alien-filled hallways. Once a couple dozen meet their demise, the president hops into red, white, and blue missile turret and brings down several alien craft. This section of the demo ended with the player being captured by the alien leader.

For the second half of the demo, I was given the freedom to run around Steelport with a high-level character. It was easy to sprint at super speed, leap high into the air, and glide through the city. As easy as this makes navigation, it will probably eliminate the need to drive later in the game.

Assigning and using your super powers works great, and they came in handy in combat. After assigning a power via the weapon selection menu, my RB button allowed me to perform telekinesis, create a fire shield around myself, freeze enemies and objects, or stomp the ground to create a shockwave. Telekinesis was my favorite, and I got a kick out of grabbing a pedestrian, sprinting to the top of a building, and flinging them far into the horizon.

New weapons are also a blast, allowing you to create black holes and kill enemies with dubstep. I loved creating a black hole in the sky, then tossing pedestrians into oblivion with telekinesis. Being able to fire weapons while using telekinesis is a nice touch, and everything controls well.

In another E3 filled with super-serious assassins and elite military squads, it was nice to see Volition continue to embrace silliness with the next Saints Row entry. It’s looking like it will push into “adult Looney Tunes” territory even further than previous games in the series, and that can only be a good thing for gamers. 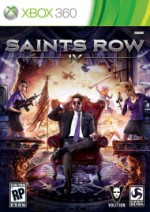