It seems like everyone’s talking about Facepunch Studios’ survival game Rust, currently available as an early access title on Steam.

Rust, a game you may never have heard about, is one of the hottest games on Steam right now. Facepunch Studios’ survival game is currently available as an early access title and draws inspiration from other sim/survival fare out there such as DayZ and Minecraft. Rust presents a brutal, boisterous combination of crafting, building, and bashing other players with crude implements to take their loot. We decided to dive in for a few hours and take a look.

I choose one of the largest official servers to play on, one that supports up to 200 concurrent players. I soon discover that playing on a server of this size leads to immediate player contact of both the positive and negative variety. Upon arriving in this new world, I move a few steps forward and begin smacking a tree with a rock. “Oh sure, just like Minecraft. I can probably use this to start crafting.”

Seconds after I begin my assault on the tree, I’m surrounded by several half-naked men wielding rocks. The leader of the roving gang holds a pickaxe of some kind, signifying his dominance over his rock-toting cohorts. He also has pants and a shirt, making him a true status symbol in a world where half-naked wanderers struggle against hunters and the cold. They make short work of me, though I do try to inflict some damage with my own stone before collapsing. I’m a fan of open PVP and corpse looting, so this does not dissuade me in the slightest. In fact, I can’t wait to get some weapons of my own to hunt those individuals down and return the favor.

But revenge will have to wait. On my next respawn, I come across what can only be termed as a “noobie death bin.” Some clever, malicious individual has constructed a house of sorts that can only be entered by climbing up some stairs and jumping in. Once inside, a player with beginner tools can’t escape in any way, and must use the suicide command (if they know it, which a new player most likely won’t). As I look around for some way out of the prison, I see someone appear on the roof. The spider has come to check the web. A few gunshots later, I’m back to respawn territory.

The next respawn is short and sweet. I fought the bear, and the bear won. Protip that I believe extends to real life – don’t try to take on a bear with a rock.

My next life is a short walk into a radioactive compound where a fully-equipped group of players with assault rifles and shotguns tear me to shreds.

On my next respawn, I meet up with a roving band of rock-men and we set upon nearby pigs and players for food and torches. The voice chat allows several of the players in my quickly assembled entourage to communicate as we rove the countryside in search of players with clothing, food, and weapons. After some time, we begin a small base of operations with a workbench, campfire, and other essentials. We build some things, kill some people – basically a good time all around. This chance casual grouping lasts for some time until I have to log for the evening.

For those curious about Rust that don’t want to engage in a casual social slaughter, servers are available without PVP elements where players can focus on crafting and battling nature.

Like other games in the same space, Rust features zombie NPCs but as far as I can tell they are mostly just threats for undergeared players. The real challenge comes from interacting with other players, making the experience fairly dynamic and fun. Like many early access titles, Rust’s current state will probably change substantially as it moves closer toward a full release. 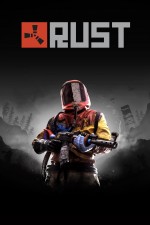