Developer Bravo Game Studios and publisher Marvelous Games will release RunBot for iOS on August 22, which the studios describe as a “Parkour/freerunning twist on the endless runner genre.” RunBot is fully 3D and utilizes both touchscreen and accelerometer technology. Marvelous Games was the publishing unit behind Harvest Moon in 1996.

RunBot’s narrative premise sets players as the eponymous character, a futuristic robot prototype with artificial intelligence and next-gen weapon capabilities. Via touchscreen swiping and touching, the ultimate goal of the game is to escape from RunBot’s creators by running around, vaulting over, and sliding under obstacles – standard endless runner fare.

A less standard mechanic, however, is RunBot’s tilt controls, which come into play during free-falls and aerial maneuvering. Between swiping, tilting, and collecting batteries and upgrades, there is a lot to manage in this game. See for yourself in the video below.

RunBot will launch for iOS only on August 22, but will come to additional platforms in the future. 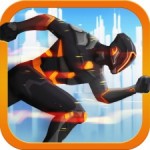