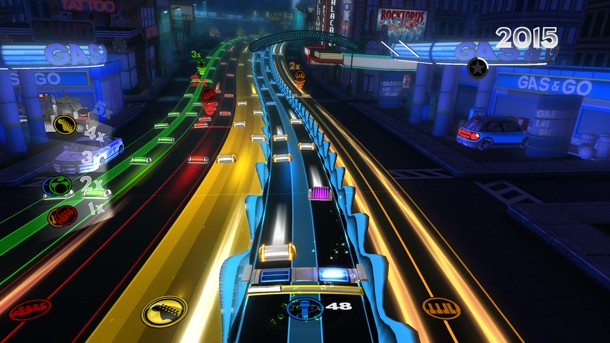 The decline of peripheral-based rhythm games has left many gamers curious to see Harmonix’s next big move outside of the Dance Central series. The iOS app VidRhythm provided a few chuckles, and the developer continues to sustain the Rock Band series with weekly downloadable songs, but neither one offers a new, unique experience for consoles. Rock Band Blitz is here to kickstart your love for music games without socially risky dance moves or plastic instruments. It’s a downloadable rhythm game featuring controller-based gameplay in line with the developer’s PlayStation 2 classics Amplitude and Frequency that benefits from cross-compatibility with Rock Band’s existing music catalogue.

I got my hands on Rock Band Blitz at this year’s Game Developers Conference. I acted on impulse during my hands-on time, immediately selecting Iron Maiden’s “Hallowed Be Thy Name.” The seven-minute roller coaster of a heavy metal track gave me a great chance to familiarize myself with the controls. Note gems scroll down a highway as you hop between instrument tracks, hitting two buttons in rhythm with the song. Building up your score multiplier by jamming away on each track is simple enough, but juggling five of them at once to rack up points requires a zen-like state. The game supports multiple controller layouts as well, which you can tinker with to find whatever is most comfortable.

Rock Band Blitz is played with one controller by one person, but Harmonix is betting that competitive music fans are going to want to trounce their friends’ leaderboard scores. The focus of the game is to keep instruments’ point multipliers up, but players can use over 10 power-ups to inflate their scores. The bottle rocket power-up destroys note gems in the distance, and the bandmate power-up makes tracks play by themselves. Performing well in songs earns currency to spend on new power-ups, which are set before each song.

Music games may have faded from the spotlight of my gaming rotation, but they never completely died. I still love busting out the instruments and rocking out with friends until morning, but other times I just want to interact with my favorite songs in a simpler way. With its controller-based play and downloadable format, Rock Band Blitz sounds like the accessible game I need. Harmonix plans to release Rock Band Blitz on PlayStation Network and Xbox Live Arcade this summer.