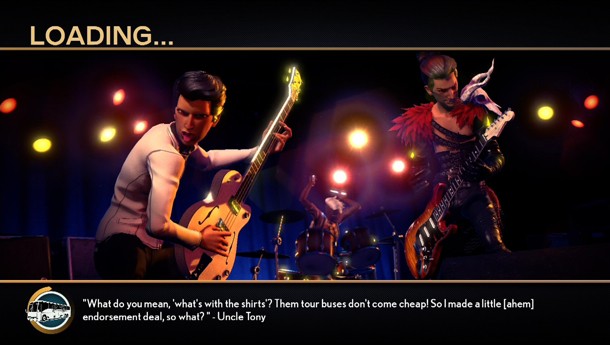 Harmonix has detailed how Rock Band 4’s campaign will be structured to give bands choice over who they become in-game. You’ll have the option to make boatloads of cash, stay true your garage band roots, or do some very odd things in the name of your art.

The choices you’ll make start off fairly routine, but open up as you and your band gain more notoriety. You’ll also be able to vote on songs to play during your sets and decide whether or not you want to give the crowd some say (including the option to perform an encore).

Despite all the choices, Harmonix says it has worked hard to make sure there are no “wrong” ones. You might end up with a manager that has a flatulence problem, but the game won’t penalize you for his beef and bean burrito problem. Your choices will shape your band's identity, but there's no way to lose and the game won't make you feel bad for your picks, even if you sell out.

Harmonix says that it hasn’t reinvented the wheel with Rock Band 4, putting it in stark contrast with Activision’s complete remodel of the Guitar Hero franchise. “Rock Band 4 is going to be the Rock Band game for the current console generation,” Harmonix says. “In a way we’re not so much rebooting Rock Band as we’re fine tuning it. In Rock Band 4 we’re going back to the things that we – and fans – loved the most about our past titles. We’ve taken some old features, like the story, and sharpened them up with room to continue expanding.”

Harmonix also added new clothing options and way to better express gender identity. These include more hair and facial hair options, as well as a number of new pre-made characters to get you into the game faster.

Rock Band 4 will be out on October 6 for Xbox One and PlayStation 4. For more, check out our recent preview from PAX.