The Freestyle Guitar Solos Are A Ton Of Fun… Once You Understand Them
by Brian Shea on Aug 29, 2015 at 06:32 AM
Publisher: Mad Catz
Developer: Harmonix Music Systems
Release: October 6, 2015
Rating: Teen
Platform: PlayStation 4, Xbox One 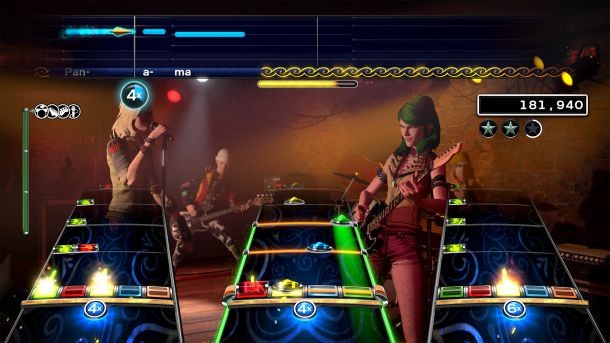 Harmonix showed off its new freestyle guitar solo mechanics for Rock Band 4 at this year’s E3, and while I had fun recklessly shredding up and down the neck, I had little understanding of how to use them effectively. Because of this, they came off as little more than a fun new gimmick in a game that felt largely the same as its predecessors. With Rock Band 4’s release just over a month away, Harmonix has implemented a new tutorial for the guitar solos mechanic which completely changes how I view them.

Upon starting up the basic tutorial, I’m taught in a methodical, yet efficient manner what each symbol in the note highway means, how to play licks, and the best way to make my improvisations fit in with the song. The tutorial does a stellar job of familiarizing me with the concept, and before long, I’m playing along the generic backing track and actually sound pretty good.

While the basic tutorial gives me the ability to play licks at different speeds and lets me experiment with some different sounds, the advanced tutorial helps me further understand the trickier details, like manipulating feedback to fit into the song and finger tapping.

As the tutorial explains, certain cues appear on the note highway to communicate what Harmonix suggests you play. A blue note highway means you should use the frets higher up on the neck, while an orange one dictates you use the smaller frets lower on the neck. A solid highway suggests you play a single sustained note, while one filled with lines tips you off to strum at different beats and experiment with holding down different combinations of buttons in the process. 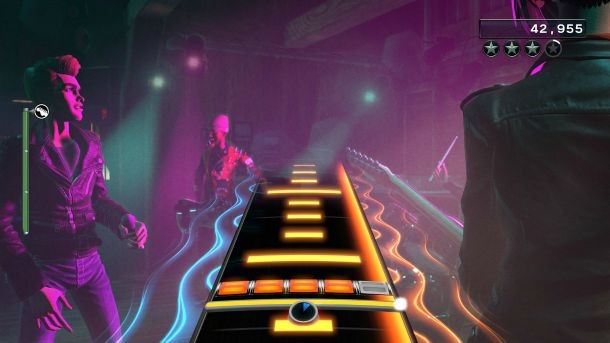 While none of these techniques are required at any point – you can play whatever you want during a song’s freestyle guitar solo sections and can even turn off the cues if you want to do so without distraction. However, you must follow the on-screen cues in order to accrue points and keep your score multiplier alive. Despite this, I enjoyed following the on-screen suggestions with my solo, and as a result more times than not, my solo sounded like it fit in with the song I played.

The biggest thing I took away from my time with Rock Band 4 is that this new mechanic — which has the player moving up and down the neck — gives you the most compelling reason to play with the Rock Band-branded guitars. Even though I’ve always favored the old guitars from the Guitar Hero series thanks to their clicky strumbars and their protruding buttons, I anticipate that I’ll pick up a Rock Band 4 Stratocaster for this game. Even if I decide to stick with my old Guitar Hero controllers, however, it’s nice to know that I can use my Xbox 360/PS3 guitars within the same console family.

While it’s a bit sad that it will be missing some of the features from previous games (such as online multiplayer) at launch, Harmonix assured us that it has plans for several updates post-launch – some of which will be free. Harmonix also said that it does not plan on releasing another Rock Band disc for quite some time, which leaves the company able to further support Rock Band 4.

Outside of a cleaned up visual style for this build that further differentiates Rock Band 4 from previous games in the series, the title is largely the same from a guitar-playing perspective. As someone who has had a blast playing the Rock Band series both with friends and by myself – this isn’t a bad thing. With such a solid foundation and enough new additions in both the features and music catalog departments, Rock Band 4 looks like it could be the love letter its fan base has been waiting for since Rock Band 3 hit in 2010.