In 2002, Rez released in the United States on PlayStation 2 to widespread acclaim. The project, produced by Tetsuya Mizuguchi, received widespread acclaim for its intense rhythm-based action gameplay and its thumping soundtrack. With Rez Infinite, the classic game is more intense than ever as it now features 1080p resolution, 3D audio, and support for PlayStation VR.

As I walked into a meeting with Enhance Games, I notice a more elaborate setup than I've seen with other virtual reality games I've demoed in the past. Adjacent to the usual television used by the team to monitor what I'm seeing my headset, two bust forms with intriguing outfits stand prominently. The one on the left I recognize as the Synesthesia Suit that Mizuguchi wore during the reveal of the project on stage at the PlayStation Experience keynote, but the one on the right is what has piqued my interest.

I'm immediately asked if I'd like to play the game "wearing the suit." Without hesitation or any knowledge of what the suit is, I emphatically agree to it. They go on to describe that the full-body vibration suit, which takes two people about five minutes to strap on the participant, takes the immersion to the next level by syncing vibrations throughout your entire body in sync with the music happening in the game. First, however, the team wants me to get acclimated to the game as it exists now for PlayStation VR, so I slap on the PS VR headset and begin the first area.

I'm immediately impressed by the upgraded resolution Rez Infinite presents and how immersive it feels in virtual reality. I swoop my head around to maintain a keep awareness of my surroundings as enemies approach from all angles. In Rez, you use the analog stick to target, while holding the 'X" button to lock on and eventually fire at the enemies in rhythm with the music. Rez Infinite allows for the same control scheme, but if you're playing using a PlayStation VR headset, you can forego using the analog stick to aim and simply look at the enemies you wish to lock on. Because of this, it's extremely easy to get caught up in locking on to enemies in an even more rhythmic manner as you catch your head sometimes naturally bobbing and swinging to the beat.

According to Mizuguchi, moving Rez to PlayStation VR wasn't a challenge thanks to his original vision. "To me, console game development is and has been more of a challenge because since the inception for this vision of Rez, the image that I had in my head was that Rez would exist in a 3D world," he tells me. "So 15 years ago – or even a couple years before that – the work that went into creating the original version of Rez was taking the 3D visioned world of Rez, but kind of almost retro-fitting that in to a 2D tube TV like the original Rez experience. There was a lot of extra work that went into making that as great as possible, but now 15 years later, the tech and the tools that are available and this VR component are almost less stressful for me because I can actually put what I had in my vision and actually make it come alive." At the conclusion of each section, your character rushes forward, creating an outstanding sense of speed when playing within VR. This thrill ride feeling was among my favorite parts of the demo thanks to how VR enhances the title. That was, until I was invited to put on the vibration suit.

The suit is put on much like a weighted vest. With several vibrating motors throughout it, it possessed significant weight. Once the vest portion was on, two Rez Infinite team members spent the next five minutes strapping in my arms and legs. The straps are constricting, like a full-body blood pressure machine, but they're effective at keeping the motors close. I slide the VR headset over my eyes again and the immersion is taken to the next level as different parts of the suit vibrate in sync with the beat of the music. When I reach the aforementioned rush forward at the end of the section, the vibration focuses on my chest, giving me a similar sensation to riding an amusement park ride. It's a whole new level of immersion that made me wish that the suit was planned to sell for retail, as I'm sure it would be awesome for a variety of virtual reality games outside of Rez Infinite.

After several straightforward stages of blasting enemies on rails, I encounter a boss fight. The music pulses throughout my body as I chase this colorful morphing creature down several narrow corridors. Each time I do damage to it, it drops back out of my view. I turn my head and the PS VR's head-tracking swoops around to show behind me and I can continue my assault on the boss, which is now pursuing me. This ends up being the most intense moment in the demo, as not only am I wearing the vibration suit, but the twisting corridors make for an almost dizzying experience. I didn't experience motion sickness at any point, but this brought me as close to that point as I felt in the entire demo.

Rez Infinite will feature an area that will be brand new to the this version of the game. Teased as "Area X" at the end of the reveal trailer, Mizuguchi says it will be created with the awareness of what VR and the computing power of the PS4 bring. "We'll be looking carefully at how we can really take advantage of VR to create something that is Rez, but now that it's in VR, it's a brand new level that you're going to be able to experience," he says.

Rez is a perfect fit for virtual reality and I'll likely look back at my demo wearing the full body vibration suit as the coolest thing I did while at the PlayStation Experience. Rez Infinite is coming to PlayStation VR, but it will be playable on PlayStation 4 even without Sony's upcoming VR headset. 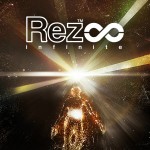