Super Stardust HD was a visual feast and a lot of fun to play, so shooter fans should have nothing to worry about with the PS4's upcoming indie title, Resogun.

Resogun is a side-scrolling shooter being developed by Housemarque. Players cruise around a circular track as they shoot at hordes of oncoming enemies and protect a reactor from going nuclear. Players have access to a variety of special weapons like screen clearing bombs and a dash move the destroys any enemies caught in the ship's path. When you rescue civilians that are scattered across the levels you gain more ammo for your special weapons. However, enemy ships will try to get to these people first, so you have to be fast. After fighting off waves of enemies for a few minutes a screen sized boss showed up and smashed my ship to pieces.

The game is super fast-paced, and it only took me seconds to get used to the controls. The game's vibrant particle effects and frantic action also reminded me of Geometry Wars.

Resogun is a PS4 launch title and will release for free as part of Sony's instant game collection for PlayStation Plus. For more Sony news from Gamescom check out our coverage of the company's press conference. 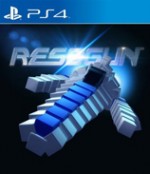