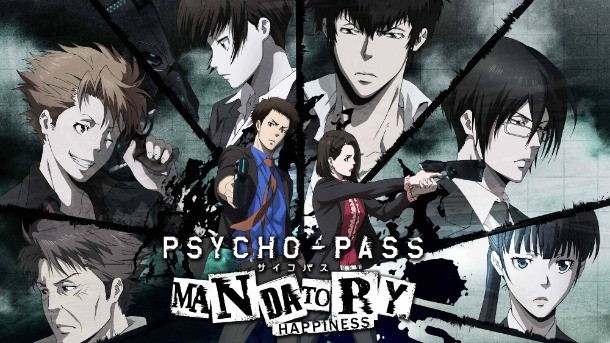 Set in the year 2112, Psycho-Pass presents a unique vision of a dystopian future where everything about a person’s mental state can be revealed via public scanning technology. This makes it easy to find and track the troublemakers before things get out of hand. A subject’s criminal latency is determined by their hue, or the darkness of the color represented in their scan’s results. The plot of the anime first aired in 2014, and follows a group of criminal investigators using this tech to keep the world safe.

Psycho-Pass: Mandatory Happiness is a new visual novel based off the anime coming next month that tasks players with identifying potential criminals and making decisions to bring them down. The game is set between the show’s two seasons and offers the choice of following two brand new characters in the Psycho-Pass universe. Players can assume the role of Nadeshiko, a woman suffering from amnesia, or Takuma, a man searching for his lost lover.  Recently, I got hands-on time with the title to see how it’s shaping up.

At the opening, you choose which of the two previously-mentioned characters to experience the story as, leading to slight differences in how events play out. For example, when I chose Nadeshiko many of the superior officers made comments about my looks and were less inclined to trust my judgement. Takuma is less level-headed and prone to making emotionally charged decisions. Each character allows players to interact with the narrative in different ways, promising a different buildup and ending for each playthrough.

Mandatory Happiness deals with a villain who aims to make everyone in the world happy. It sounds like a strange set-up at first, but the first few cases reveal the twisted situations this character is capable of creating. He tracks down lonely, hurt people who may be prone to criminal activity and preys on their deepest desires. As an investigator in this world, you have to go to some desperate lengths to stop his plans.

The first case seems innocent enough at first, with a concerned mother reporting that her daughter ran off with a high school classmate. Like many visual novels, you may find yourself forced to weigh troubling options with little time for deliberation. One of the first tough decisions I was presented with was to ask neighbors for more information about the students’ relationship, or rush headfirst into tracking their last known location. I chased the two down, only to realize there was something else going on that I hadn’t discovered, leading to bloody consequences.  I immediately regretted my choices regarding the case, and felt like I had failed at my job.

The game has little puzzle interaction or investigation. So don’t expect anything like the Ace Attorney or Zero Escape series as almost all of the gameplay comes from dialogue interactions. You don’t have to be a die-hard fan of the anime series to enjoy this mystery, though it does make the initial jargon-heavy dump of information at the beginning easier to comprehend. At any given moment, you can access a running log of important names and items that will help you keep up with the fast-moving plot.

Presentation is the strongest aspect of Psycho-Pass: Mandatory Happiness. Each character, including nearly everyone from the show’s first season, is animated with a wide variety of expressions. The cases are well thought-out and puzzling, with on-screen dialogue to help you understand the inner thoughts of your avatar. The cyberpunk influences of the universe and twisted narrative should put it on the radar of anyone looking for a compelling interactive story.