As promised, Microsoft aired a 41 minute live demo in which developers gave fans a first-hand look at the upcoming Project Spark. The live stream not only offers a stronger grasp on the concept of Project Spark, but also shows the ease of creating entirely new worlds within its user interface.

Update: We have added a clarification regarding the differences between crossroads mode and the level shown in the latter part of the live stream. To start, the game's creative director and community manager show off the blank canvas of the empty world mode.

In this mode, you are able to create an entirely interactive world of your own. In the picture shown above, you can see the world map and the starting playable character chosen for the demonstration. In order to show off the ease of use with a touch screen, the demo is shown using a PC running Windows 8. In this case, a U-shaped landmass is easy to construct because of the intuitiveness of touch screen controls. The demo, however, is shown using a Xbox 360 controller. The silvery mass is created and guided by the orange circular cursor on screen. To add more depth to the world, players can construct land masses by expanding or lowering land. This latter option combined with tinkering with water levels is how water masses can be created. In the image above, a massive tree stump is created by expanding land mass upwards and hollowing out the center of the mass. Afterwards, texture is added to the stump to make it look more realistic. To really bring the world alive, various "biomes" options can be used. A biome is basically a type of environment— like an "arctic" setting or "woodlands" setting — that can be spread onto the surfaces of the map. This includes grass, snow, plants, sand dunes, etc.

The various biomes make the level more noticeably realistic.  Above, a river biome is spread out upon a water mass to give it a more natural appearance. Players can add even more detail by creating tunnels and waterfalls. The wrapping option can be used to add textures quickly and easily to even these types of surfaces on the map.

What makes the level creation easy is that objects like characters and props are pre-loaded with "brains." The brain basically consists of actions that these objects perform. The brains can be set to perform desired new actions by the player.

For example, in the demonstration, a rock is set to follow the player's character. Just the same, the object can be set instead to attack the player, or even emote certain ways when the player passes by. The method of attack can be anything from a bow and arrows to a missile— and even the size of the projectiles can be modified. Another example is shown with a set of goblins (which would ordinarily attack the player) instead fall in love with and/or dance near the player.

Check out more ways to customize levels and see a preview of a developer designed level using Project Spark on page two. The props that can be added to the map screen vary from small objects to houses. For those who like to venture off the beaten path, they can create their own structures with land masses and add a door for entry as shown above. It's surprisingly easy to create this impressively detailed and gorgeous world in only a half hour. In addition, there are more possibilities to make the empty world into your dream game by adjusting the user interface and the perspective and play style.

For those intimidated by the start from scratch model, there is another option. The crossroads mode is intended for younger or less-experienced players. Basically, it allows players to select presets to customize a new level quickly. For example, it can be chosen what type of environment the level will be set in or what type of quests the player will complete.

While the crossroads mode was not shown in the demo, a fully designed game created with Project Spark was shown.

The level demoed  looks similar to Limbo, and shows off exactly what type of game you can create in Project Spark.

This game has the player chasing a character across a dark, side-scrolling landscape.

Rather than just play the level as intended, players can adjust it to their liking. Shown above, the pre-designed level from before is brightened up, and gives the whole level a new look. To take it another step, the level is shown in first-person shooter mode. Rather than play the game of cat and mouse, the player can shoot the character instead of chasing him using the new reticle as a guide.

For more information on Project Spark, be sure to check out our first preview and the screenshots from the live stream below.

Project Spark will be coming to PC, Xbox 360, and Xbox One at a not yet disclosed date. 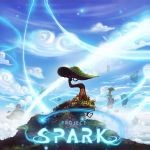