Prey 2 is an ambitious title, and the new direction may seem as alien to fans as Tommy’s apathetic capturers. Despite featuring a new protagonist, new gameplay mechanics, and an entirely new world, Human Head argues that it is still a Prey title at heart.

While spirit-walking, spheres, portals, and plays on gravity are gone, Prey 2 will continue to focus on self-discovery and challenge the player by introducing new FPS mechanics. The goal is also to address a slew of nagging questions, too. Where did the spheres come from? What happened to the humans that were abducted and survived? Where is Tommy?

Regardless of the drastic departure from a narrative standpoint, the game itself starts off in a very familiar setting, as per our demo last week. On July 11, 2006, an unknown force invaded Earth, ripping Tommy and those close to him from their reservation in Oklahoma. That same night SeaJay Air Flight 6401, a commercial airliner, was abducted alongside countless others. More astute Prey fans may remember Tommy stumbling past the captured craft in the first game.

Prey 2 follows Killian Samuels, an air marshal on SeaJay 6401. He awakes on the sphere none the wiser than Tommy, working his way through rubble and burning debris to find himself gazing upon earth from a most disturbing perspective.

Samuels pulls out a gun – a luxury afforded to him thanks to his status as an air marshal – only to be attacked moments later. Instinct takes over and he chooses fight over flight. Eliminating the first round of hostiles, Samuels traverses his way toward the burning cockpit of his vessel, following screams in hopes of finding other survivors.

Reinforcements halt his progress, requiring even more aggressive tactics. This next encounter highlights the expanded cover system. Samuels pops in and out from behind debris, blind firing as needed, or running, jumping, and sliding to a new vantage point. Armed only with a pistol against superior technology, Samuels is stunned and staggers to the ground. The alien creatures close in, tower over him while muttering in their foreign tongue, and knock him into oblivion.

Time passes, and the familiar surroundings disappear. Samuels awakens after an undisclosed amount of time and finds himself acclimated to life on an alien world called Exodus. It is obvious that he has been a resident for some time, and more bizarrely, has made a name for himself as a bounty hunter. With no recollection of the years between the initial abduction and now, we have as much catching up to do as Samuels does. Like Tommy before him, Samuels has no grasp of his role in the world, and even thinks that he may be the only human left. Until he meets Tommy, that is, who is said to play a substantial role in the sequel.

The bounty hunter vocation was intentionally chosen by Human Head in an effort to explore both sides of the predator/prey relationship in the sequel. Samuels has made a number of friends over the years, but even more enemies.

We get a first look at Samuels in action in a city described as “alien noire” in presentation. Exodus is unique in that it is a tidally locked planet – one side always faces the sun, and another side never feels its warmth. This Blade Runner-inspired city falls somewhere in-between the light and dark zones, a vertical playground perfect to show off Samuel’s new moveset. He is more agile than one may expect, able to run, jump, vault, grab, shoot, and dive in a parkour-esq movement system. These augmented abilities will be an imperative part of the job, necessary for pursuing bounties and surviving the daily dangers of life as a bounty hunter.

Samuel’s life on this alien world is much in the hands of the player, as Prey 2 eagerly embraces an open-world setting. “Player choice” was an oft-repeated phrase during our demonstration. What missions Samuels accepts, where he travels, what gadgets he uses, and how he interacts with others is all dependent on play style. Despite what the genre may dictate, Samuels won’t walk around sticking a gun in the face of all he passes, either. Rather, choosing to be aggressive is a deliberate act, and one that will have repercussions in nearly all facets of the game.

Not wasting any time, we jump into a mission that highlights both player choice and the open world nature of the game. Gadgets are core to the bounty hunter profession, and Human Head promises well over twenty, with double the upgrades available throughout the campaign. A scanner of some sort provides an AR layer over the world, similar to Arkham Asylum’s detective mode. This particular city is home to drug and armament trades, seedy casinos, and strip clubs. Characters of interest are highlighted throughout the environment, and considering the shady populace, many opportunities for interactions become available. This is a good place to be a bounty hunter. We choose to walk by a small alien being accosted by a pair of larger thugs, although we could stop if in the right mood. Instead, we decide to go after a bounty that popped up on our scanner. Traversing upwards toward his location, we find the hit in a strip club. Preoccupied by the entertainment, we have a moment to make a decision. This particular target is wanted dead or alive, but we’re not keen on risking the lives of innocents by opening fire in such a crowded space. Instead, we close the gap and threaten him, optimistic that he will surrender of his own free will. The tactic doesn’t work, and he bolts. These sort of “ambient bounties” – ones that are not core to the narrative and instead are stumbled upon – are never defined. The hit could try to bribe you, surrender, open fire, or run, as this particular alien opted to do.

We pursue the bounty, but not for long. He forfeited a peaceful surrender, and his life, by running. A few carefully placed bullets take him down, and we collect our reward before looting his body for another cash bonus.

This might not have been the most honest outcome, but it is a viable one. Prey 2 employs a morality system that will dictate how characters react to the player, but isn’t far-reaching enough that it will change the outcome of the game. You can choose to randomly kill civilians and mug innocents if you like, but expect the enigmatic law enforcement agency to come down on you. The “eye in the sky” drones are particularly troublesome, as they won’t stop seeking you out till you destroy them. Another gadget – the shoulder-mounted rocket – comes in handy during such situations.

Making questionable moral choices may benefit you by eliciting information from civilians and making it easier to score cash, but will also influence the type of missions that are available to you. Good or bad, your reputation will precede you. Maintaining an honorable demeanor will have its advantages, too, especially with vendors. Either way you decide to play, the city is very much alive, and you will find opportunities to help or hinder others around every bend. At one point in time we picked up on a DNA trail, which can be used for tracking or investigative purposes. The trail led us to a group of aliens shaking down a lone figure. We dispatched of the mob quickly, taking advantage of an anti-gravity gadget to pull them up and out of cover. The ambushed alien thanks us with some cold cash.

An official bounty comes through the wire, delivered by an AI companion of unknown origins. We know little about her, or who created her. What we do know is that a Mafia-esq boss is waiting to be taken down. The hit’s location isn’t known, so our visor instead sets a waypoint for a well-known informant.

An ambush unfolds on the way to the informant, once again highlighting the fast and fluid combat. Moving from cover to cover is encouraged. The shoulder mounted rockets come in handy, making quick work of the foes before moving onto higher grounds to intersect the informant.

Turns out the informant isn’t very talkative, offering to loose his lips for double his standard rate. We could pay, but aren’t feeling generous, and instead opt to push his bodyguard over a railing and to his death. The informant isn’t happy about our action, but knows he is bested for the time being. He gives us the information we need, but makes known that he will be calling in a favor in the near future, most likely painting him as a mission giver later in the game.

The bounty’s current location is now updated on our map. Using yet another gadget – hover boots – we glide down from our lofty position, gaining ground quickly. Since environments are spacious and often vertical, this gadget in particular will be used heavily.

Before entering the building that houses the hit, we stock up on grenades from a nearby vendor. The visor provides a plethora of information, and we take the bounty’s unsuspecting lieutenant hostage before entering the building. We could have killed him on the spot, but the practical application he offered was much more appealing. His purpose is quickly negated, however, as the hit dispenses of him with one clean blow. So much for loyalty.

Another chase unfolds, but this one is infinitely more interesting. The target can teleport, making it much more challenging to keep taps on him through the waves of aggressive bodyguards. He also drops bombs at regular intervals.

Crossing a large portion of the city in the pursuit, and we swap between traditional firearms and the alternate fire of the shoulder rockets to try and slow him down. At one point, he even has us train-hopping, carefully timing jumps to avoid being flattened on the tracks below.

Eventually we capture him, as this bounty is wanted alive. He, like many before him, tries to offer us a deal by doubling the amount on his head. We could take the offer, but remain virtuous instead and send him along for collection. One more option presents itself before we part ways – interrogation. Interrogation can yield information about the narrative, loot locations, and other hits. Problem is, each individual interrogation risks killing the bounty. Not willing to chance it, we warp him away and wash our hands of the situation.

The AI liaison chips in our ear, a hint of urgency in her voice. She warns of a familiar face coming our way, and just as one encounter ends another begins. A massive four-legged beasts rages into the plaza, accusing Samuels of betrayal and spouting words of vengeance before the screen fades to black.

So far, the small taste of Prey 2 we’ve had is appealing, but we’re interested to see if the somewhat abstract concept of self-discovery and the alien setting is enough to make Prey 2 feel like a direct sequel. We’ll find out more over the coming months as the press rollout continues.

Prey 2 is slated for release in an undisclosed window of 2012 for the Xbox 360, PlayStation 3 and PC. 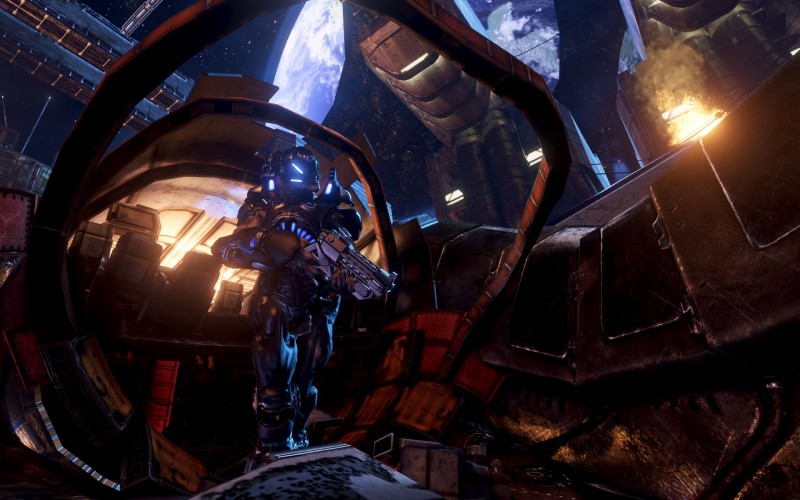 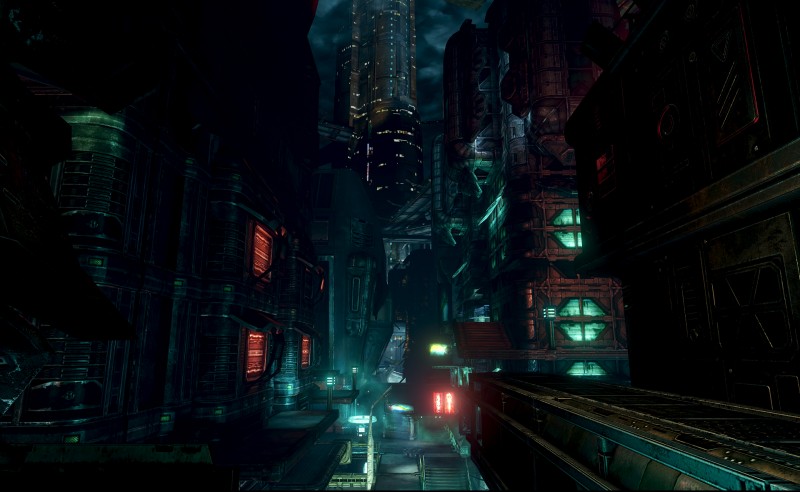 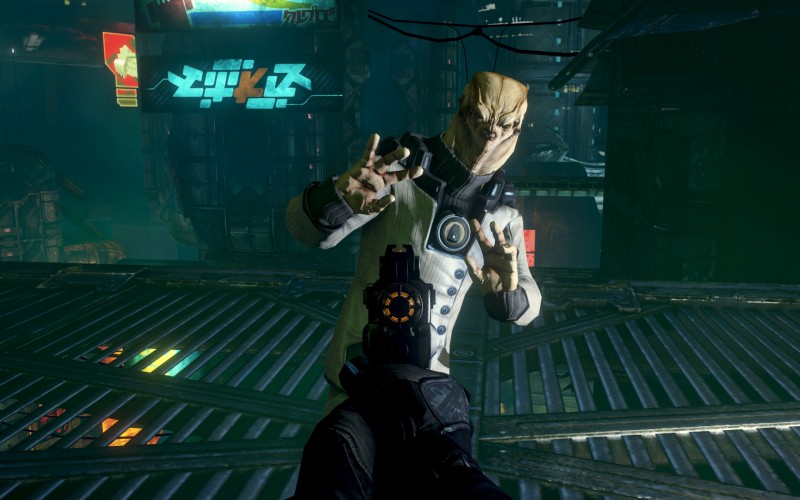 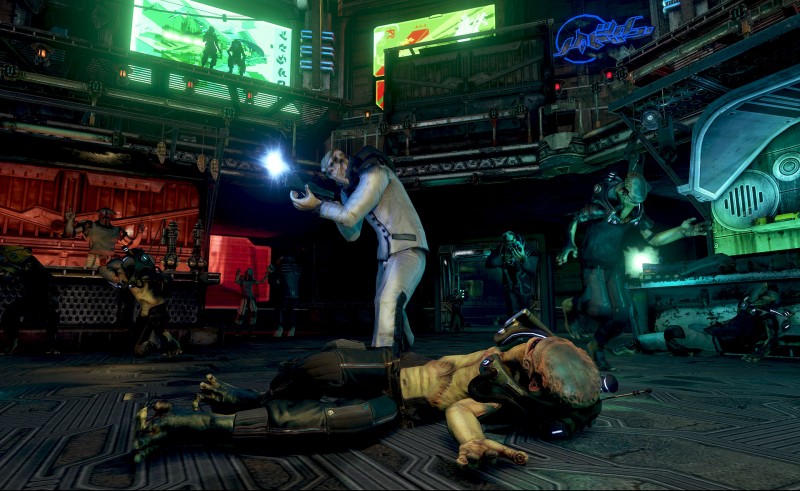 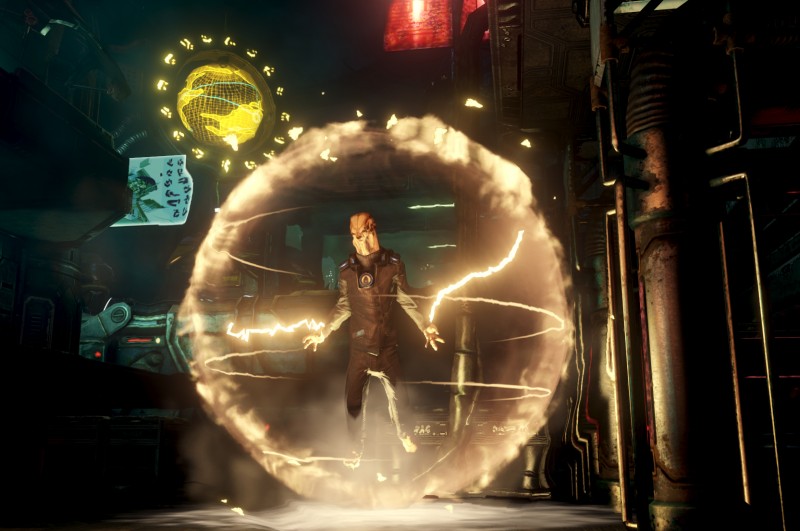 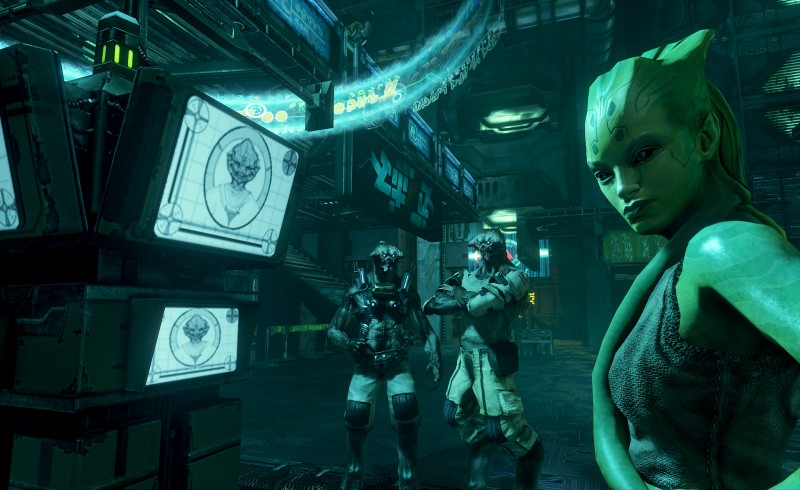 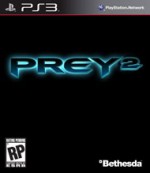