Yoshi’s Woolly World took the platforming the titular character is known for, and dressed it up in an adorable fabric aesthetic. This fuzzy exterior masked a game that was easy to learn but difficult to master.

Platformers are normally about making precise jumps while killing every enemy along the way for the high score. Yoshi games are a more relaxed version of this, with the main character able to hover after a jump and able to ingest enemies, turning them into eggs to hit others or solve puzzles. It’s a lighter affair punctuated by a cute story that motivates you to move on to the next level.

While you would think a portable port might be inferior, playing Yoshi’s Woolly World on the New Nintendo 3DS ups the frame rate to a smooth 60fps, a higher framerate than the Wii U version. That drops back down to 30 if you play on the original 3DS, but it’s still impressive. All the levels from the Wii U version are intact, making this seem more like an enhancement than a port.

The old amiibo functionality returns, but if playing as Ganondorf Yoshi isn’t your style, you can now customize your Yoshi with two different editing modes. Easy Craft is like using bucket fill, covering the various Yoshi in whatever color you choose. If that’s not enough, you can switch to professional to edit each individual part, though only up to seven colors can be used at once. These creations can then be shared via StreetPass so your friends can see how many ways you can make Yoshi look like whatever character you dream up.

Those who want a breezier journey can try out new additions to Mellow Mode. Small Poochy pups follow Yoshi around, acting as recoverable eggs that seek out secrets. It’s not a mode I will personally explore, but it’s nice to know I could give this game to a less coordinated family member and be sure that they’ll still have a good time. Speaking of the cute little pillow pup, Poochy gets to star in its own mini game titled Poochy Gold Rush. This replaces the bonus games of the console version with a runner style dash to grab as many jewels as possible.

After spending some time with this port I almost wish I had waited to play 3DS version. The fluid framerate looks amazing even on the smaller 3DS screen and the colors are still vibrant. Based on what I was able to play, this is shaping up to be a fantastic port. 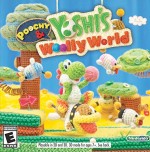