Pokémon fans will soon have another way to interact with their favorite characters, on a most unlikely platform. The Pokémon Company is bringing the digital version of its trading-card game to iOS. Players can check it out for the first time this weekend at the Pokémon World Championships in Washington, D.C., but we’ve got you covered if you aren’t able to attend. We got to see the game in action ourselves, and learned more about its development from the game’s director.

The PC and Mac versions of the Pokémon card game (pictured in this preview) launched several years ago, with the goal of complementing the physical card game, and not competing with it or replacing it. When you buy packs of cards, for instance, there’s a code inside that can be redeemed for the digital versions of those cards in the online game. The Pokémon Company says it’s hoping players will go back and forth between both the physical and digital versions of the game.

“We set out back in 2010 to create that experience,” says Andrew Finch, director of online products at The Pokémon Company International. “We wanted it to be as deep and as engaging as possible, and to be able to take a customer from a new user, who has never even played the Pokémon trading card game before and take them all the way. No having to step away, no having to switch games to get a deeper, richer experience, but really take them from that beginning interest to find the level of competitiveness that they’re comfortable with.”

The Pokémon Trading Card Game debuted in Japan a few months after the Nintendo-published games first hit the Game Boy in 1996. A lot has changed nearly two decades since the card game’s release, but one thing has stayed fairly consistent – even after six generations of cards: Learning how to play the trading-card game can be daunting for new players. That’s where the online versions, both the previously released PC version and its iOS counterpart, are a big help. “TCG games are really hard to learn unless you have someone sitting across the table from you, teaching you,” says Finch. “There might be a handful of people that learn from the rules, but most people got demoed it, had a friend who was into it, and online allows us to change that paradigm. It allows us to change to when you don’t have a friend, we can give you someone – the computer – who knows how to play the game, and really lower that barrier to entry. But also, when you are making that step and you’re going into leagues and tournaments and things like that, it allows you to gain the skillset and confidence to feel like you can participate at a level at least without embarrassing yourself.”

Finch knows a thing or two about trading-card games. He was at Wizards of the Coast in 1996, where he worked on the Pokémon card game. He was also the executive producer of Magic: The Gathering – Duels of the Planeswalkers, which brought the card game to the digital space.

As Blizzard’s Hearthstone has shown, these kinds of games are right at home on tablets. “The touch interface is just brilliant,” Finch says. “It is absolutely the best. Card games translate so well to touch interface, and we have done that. All of the functionality that’s on the PC and Mac is on here – nothing got cut or left behind. It’s identical. Your accounts are identical. You can be playing on a tournament on your PC and have to go to the bathroom, shut down your PC, grab your iPad, log back in – even midgame – and still keep playing. It’s all the same.”

The game runs on Retina-enabled iPads, and it looks great. It replicates the clean presentation of the PC and Mac game nicely, though the UI has been tweaked a bit to take advantage of the touchscreen interface. For example, menus slide in and out of position to maximize screen real estate. Managing a collection of cards can be tricky, but a variety of filters and views ease the process. The carousel view is a handy way to flip through cards (and to show them off to your friends), but when you’re looking to build a deck it might not be the most efficient way to sort through your collection of hundreds. That’s where list views, with robust filtering tools come into play.

Finch says his team is working closely with the creators of the cards – after all, they put the codes into the packs – and they’re able to faithfully recreate their physical forms on iPad. They’re not only working with the same files that go to the printers, but they have access to the stamps used for special foil cards. When you put those into play, they flash and shine the way they would in real life; there’s not a generic lighting pass that goes across the table, Finch says.

When we spoke with Finch, you could see how happy he was that the iOS version has remained a secret for so long. “Our players have no idea,” he said. “They have absolutely no idea. In fact, if you read our forums, they’re adamantly convinced we would never do this. That’s the exciting thing. It’s going to absolutely blow them away, because they want it so bad.”

We don’t have a firm release date for Pokémon Trading Card Game Online on iOS, but it’s likely to pop up in the coming weeks. In the meantime, you can check out the PC and Mac versions of the game by visiting the official site. 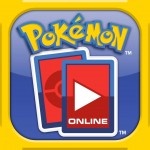