When the first Plants vs. Zombies Garden Warfare was introduced, it was done with a series of mashup spoofs. One of those, Grass Effect, is being revisited for the sequel.

As announced earlier this year, those that pre-order the game will have access to the Z7 mech, a variant for the new Imp class. This version of the walking tank features Pull (a Mass Effect biotic power), a Zomniblade for up-close melee attacks, and a Z-8 Avenger basic weapon to dish out continuous damage.

In addition to the Z7 mech, those that pre-order will get a pack of 14 different emoji customizations for their flora and undead fauna. Plants vs. Zombies Garden Warfare 2 will be out on February 23 for Xbox One, PlayStation 4, and PC. 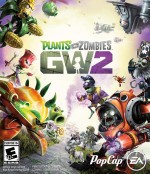