When PlanetSide launched in 2003, it boldly tried to marry the persistence and player customization of massively multiplayer games with the kinetic action of a first-person shooter. Though it's fondly remembered by many for its unique concept, crippling bouts of lag ultimately grounded the ambitious project.

Armed with better bandwidth and all of the progression refinements developed by games like Halo, Call of Duty, and Battlefield, nine years later Sony Online Entertainment is ready to give the concept another go.

Like many other MMOs these days, PlanetSide 2 embraces the free-to-play financial model. Anyone will be welcome to download the game, with SOE supporting the servers by selling players several customization options for guns, vehicles, and soldiers. SOE was careful to point out that because it wants to keep the competition pure, there will be no play-to-win style microtransations. Most of these purchases are purely aesthetic. SOE also plans to offer a membership to its biggest fans, but hasn't determined what this will offer players yet.

As a re-imagining of the original concept, PlanetSide 2 doesn't stray far from its predecessor. The same three factions -- the Terran Republic, New Conglomerate, and Vanu Sovereignty -- are still duking it out for control of a futuristic planet. When your faction gains control of enough capture points in a specific region, it will gain possession of the region. Controlling regions awards your faction with resources like new weapons and ammo.

To give the game a modern makeover, SOE created a new proprietary engine called ForgeLight that produces deferred lighting, atmospheric light scattering, environmental shaders, tracer fire, and improved character details. The engine also introduces a day/night cycle to the never-ending war. Battle tactics will shift once the sun goes down, as teams armed with night vision will have a leg up on the competition.

Like Battlefield, players can choose between several different player classes -- the fast and mobile Light Assault, the Heavy Assault, the stealthy Infiltrator, and support classes like the Combat Medic and Engineer. If you have problems winning gun battles, it's possible to play a 100-percent support role and still be a major contributor to the team by healing teammates, repairing vehicles, hacking doors, spotting enemies, and directing squads.

Logistics play a much larger role in PlanetSide than other shooters. Teams who smartly deploy vehicles with mobile respawn and resupply capabilities will have a much better chance of turning the tide of battle than disorganized bands of lone wolves. Leaders of the 10-players squads can also choose to equip a squad respawn perk that will keep their soldiers closer to the front lines.

The two battles we watched during the GDC demo showcased a wide-open battlefield with both vehicles and infantry. The first skirmish featured gunships swooping down on large tank columns along the countryside. With tracer fire streaking across the battlefield and impressive missile explosions, the scale of the fight felt huge even though only 50 players were on the server. SOE claims PlanetSide 2 can support over a thousand people on the battlefield at once, but even with only 50 people I noticed considerable pop-up and occasional lag. The game is only in alpha, so the development team has a lot of time to iron out the kinks.

The second section of the demo featured an infantry battle at one of the control points. SOE says each control point is roughly the size of a multiplayer map from a modern shooter, and each of these areas is being hand-crafted to give them a different feel and support different types of gameplay.

As you would expect from a modern shooter, PlanetSide 2 also features a robust player progression system. Like Battlefield 3's Battlelog, players can track their performance in real-time, earn weapon-based medals, and customize their gear with upgrades like scopes and adjustable rates of fire.

Sony Online Entertainment plans to roll out more information as we move deeper into 2012, but if you have some comments to share with the dev team or want to sign up for the pending beta, head over to its official homepage. 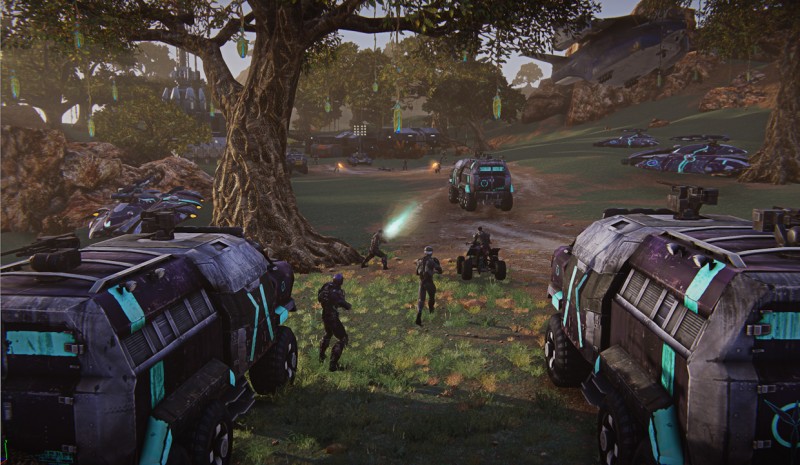 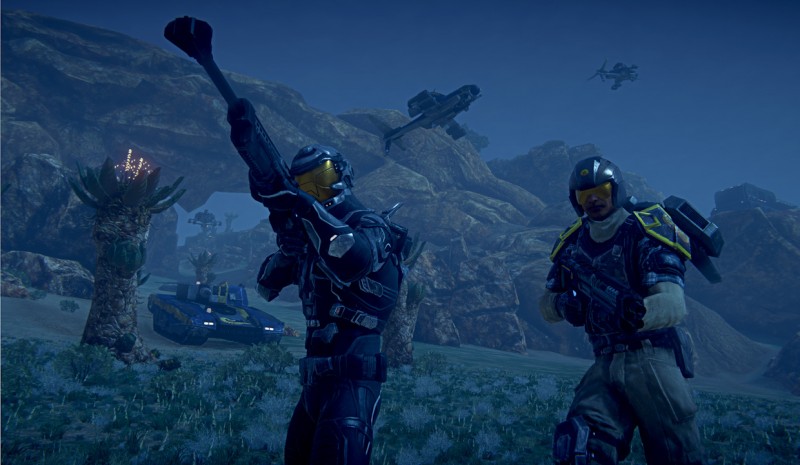 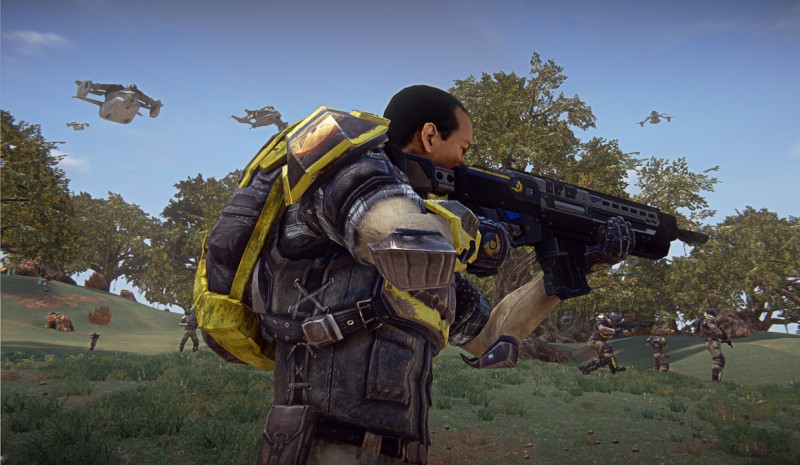 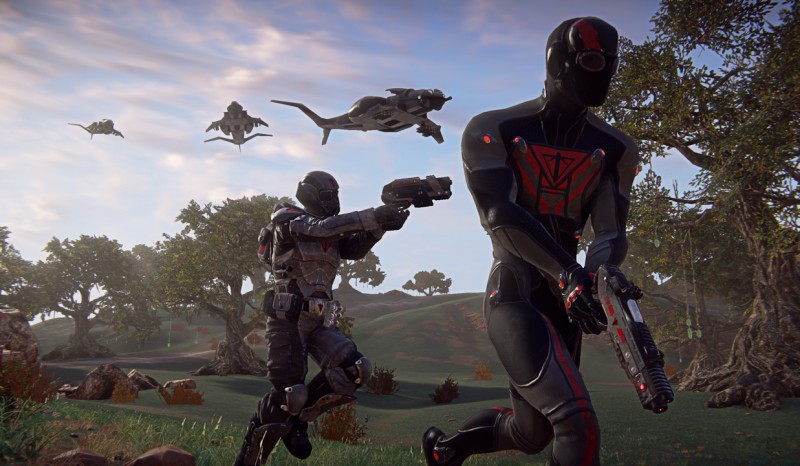 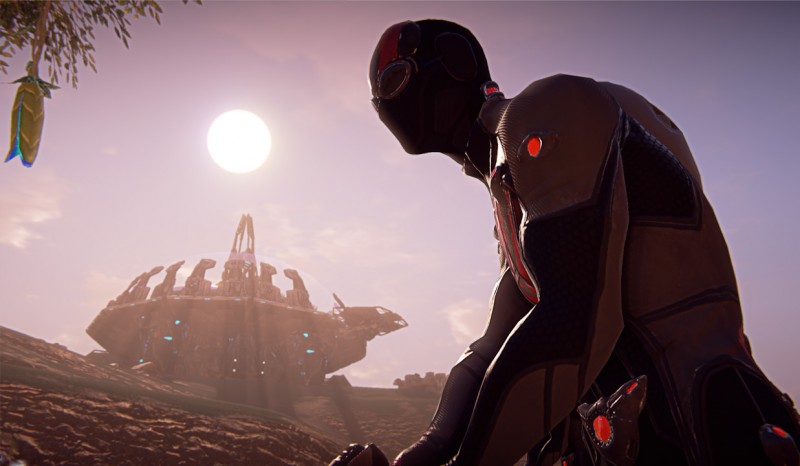 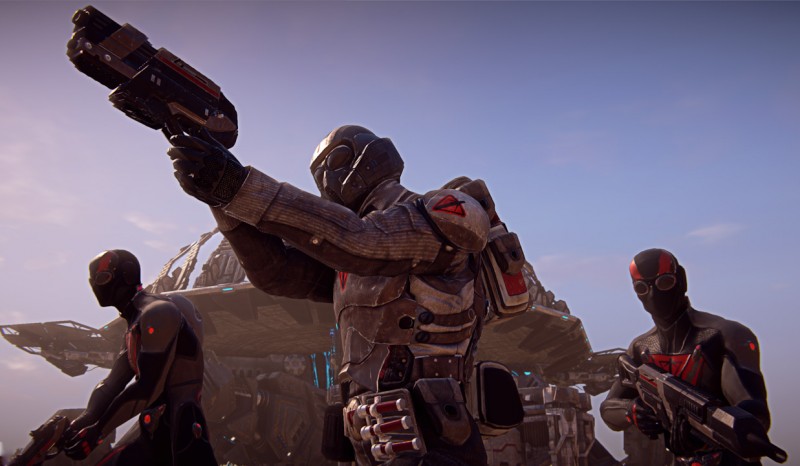 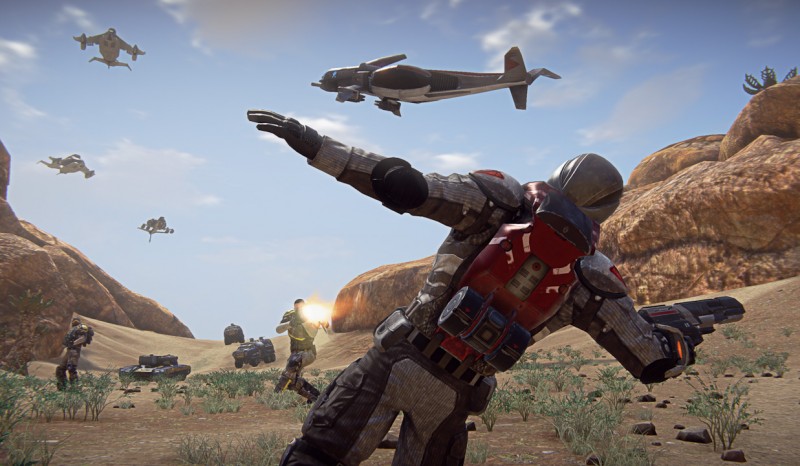 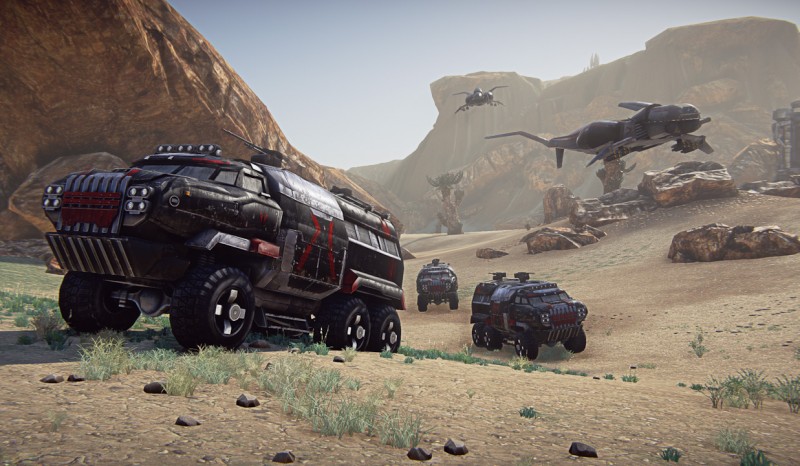 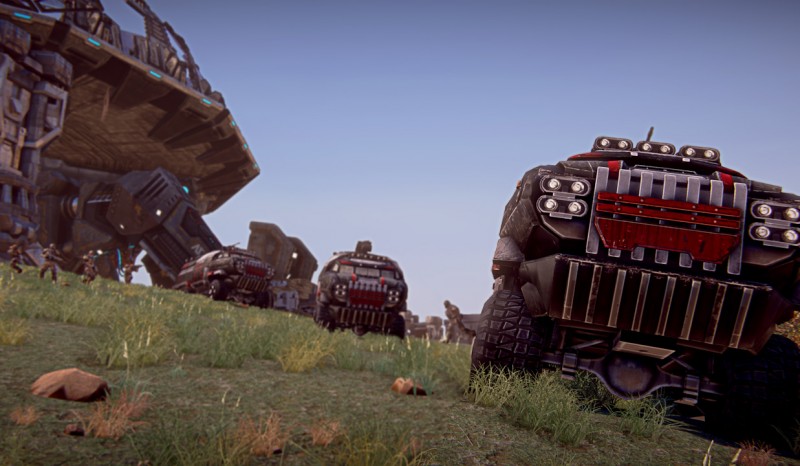 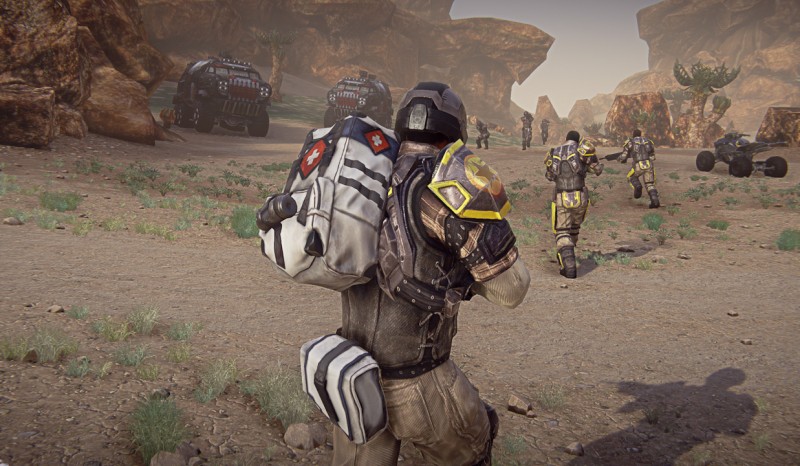 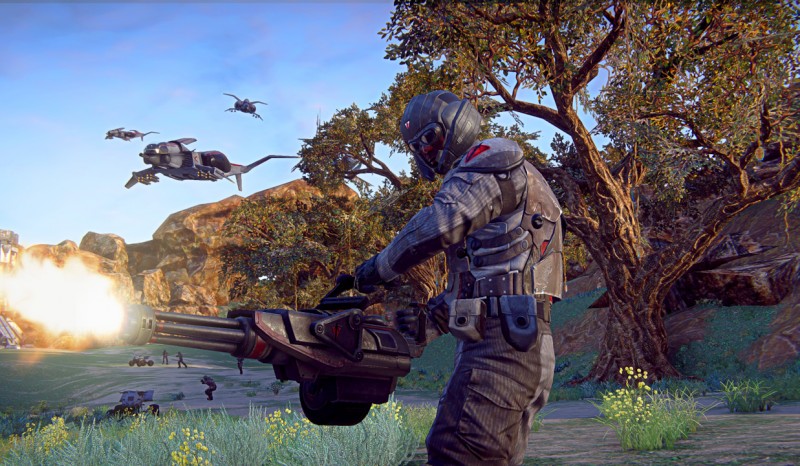 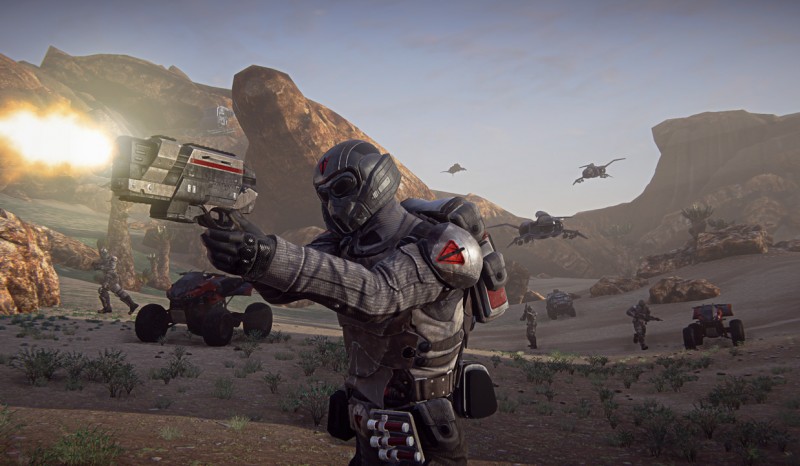 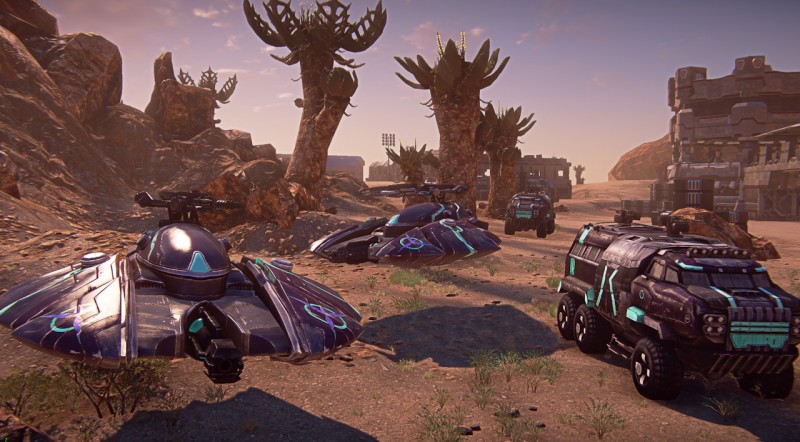 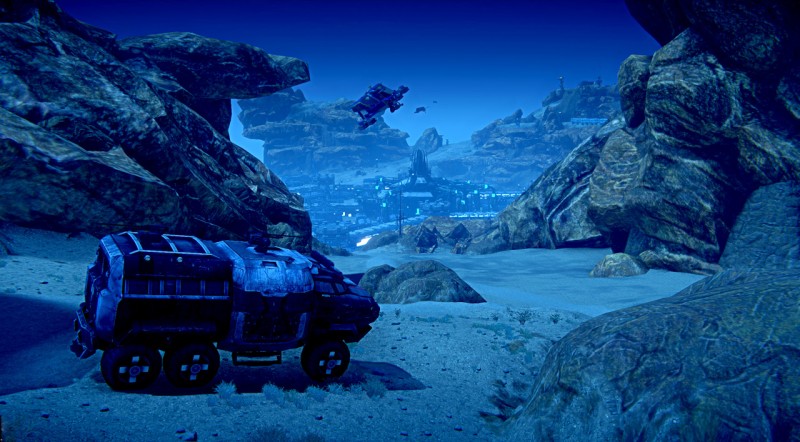