In a new trailer for Persona 3 Dancing Moon Night, dormmate Yukari shows off her dance moves, with a little help from Communicator Fuuka.

You can check out the newest Persona 3 DMN character trailer below, which also has a Hideki Naganuma remix of one of Persona 3's main themes as its background music. It shows off Yukari dancing to the music and showing off a dancer costume, her usual pink Iwatodai Persona 3 outfit, and a cheerleader outfit.

She eventually gets joined by Fuuka and the two briefly dance together, the kind of character interaction Atlus has said would be the focus of the game this time around.

Both Persona 3 Dancing Moon Night and Persona 5 Dancing Star Night are scheduled to release in May in Japan with no word on a western release yet. Both games are releasing on PlayStation 4 and PlayStation Vita. 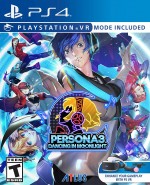