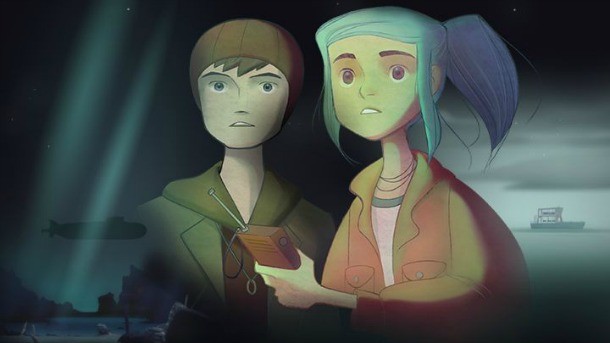 More developers are experimenting with interesting delivery of choice in narrative. Add Oxenfree to that list. By Night School Studio, a two-member team comprised of Telltale and Disney alumni, Oxenfree aims to feel fresh and wondrous. As inspiration, the developers thought back to some favorite films that captured those feelings as inspiration, such as The Goonies, Poltergeist, and Stand By Me. It’s an intriguing mix, and that’s part of what makes it so exciting. What if you combined a coming-of-age movie with a cool supernatural mystery? That’s the best way you can describe Oxenfree: it’s reminiscent of feel-good movies from the ‘80s, but with a spooky tale tucked in. I recently played a private demo of the game with the developers and was impressed by its relatable characters, natural dialogue, and choices that had me building relationships with various characters. 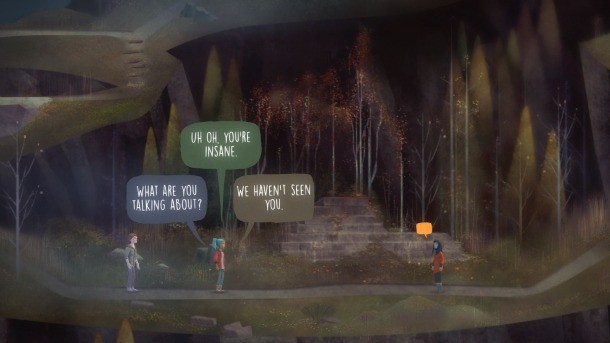 Oxenfree is about a group of teenagers, who are off for their “senior year rite of passage”: A huge end-of-year party on Edwards Island, an old military outpost. This is a quaint little place with shops and a beach, but without cell phone service. What was supposed to be a big celebration turns into only five people arriving, and they’re all tackling different issues in life from loss to unrequited love.

You play as Alex, a young woman adjusting to having a new step brother; he’s also come to the island with her. As you play, it’s a constant stream of dialogue, and you pick all of Alex’s responses. Her speech shapes your relationships within the group. You have everyone from the childhood best friend to the resident mean girl along for the ride. The choices are abundant; sometimes it’s something as small as picking who to target for a game of truth or dare; others, it’s deciding which character to spend extra time with.  The journey starts out normal, but the group soon picks up some weird transmissions on their radio, making them wonder if they’re the only ones on the island. The journey involves finding out more about the island’s history and discovering more about the characters’ lives, and, you know, figuring out if someone’s up to no good. 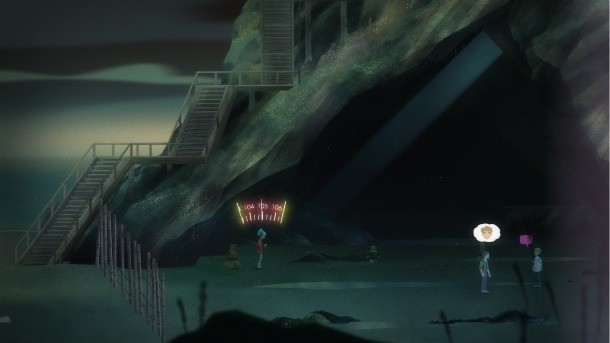 As mentioned previously, the gameplay revolves around a constant stream of dialogue. It doesn’t stop for you to make your choices; you must always be in the moment reacting to what’s happening to you. At the same time, you have complete control over your character to act out scenes how you desire. In one scene, I’m at the beach and while the characters are conversing, I can perform small actions like drinking a beer or throwing rocks into the water. In another event, I test the waters by continuing stepping toward a character when she tells me not to come any closer. I won’t spoil anything, but she does react to me completely ignoring her request.

Scenes also play out differently depending on your actions and your relationship-building factors into your ending. However, what fascinated me most was the fantastic dialogue. At times, I laughed, at others I cringed because it captured that awkward time in your life where you’re no longer a child, but not quite an adult. Most of the many dialogue options are interesting; you can choose to be extremely forward or sassy, or play the nice girl. Ultimately, the developers said they want you as to decide how you come-of-age, which is intriguing in itself for a video game. Not to mention you also have a cool supernatural angle to explore. Is it just their minds playing tricks on them, or is something really out there? You’ll have to play it to find out, but it’s one demo I walked away from impressed by its genuine feel. Time will tell if the choices come together in an interesting way.

I suggest watching the trailer below to get a better idea of the game.

Oxenfree is coming to PC and Xbox One. Right now, it’s set for a January 15 release.