The 2D action/platformer is a common genre for indie developers to tackle, but not an easy one to innovate in. Gamers have been hopping over bottomless pits and onto the heads of enemies for decades, but every once in a while we get a taste of something new. Last Limb Games' food-themed Organic Panic pits fruit and vegetable warriors against an army of meat and cheese, while throwing together a grocery list's worth of ambitious features: completely destructible environments, physics-based gameplay, fire and liquid simulations, couch co-op and competitive multiplayer, and an in-game level editor that allows players to build and share levels. In the early preview build of game we played, Organic Panic's ingredients are blending together nicely. Last Limb Games is just a week away from the end of its Kickstarter campaign, but has been working on Organic Panic for five years. While the preview I played was still very much a work-in-progress (many of the storyboard cutscenes are still rough sketches), it provided a good idea of the abilities players have at their disposal. These abilities allow you to alter the 2D landscape, which, similar to the Worms series, is completely destructible. However, Organic Panic's levels are also physics-based, so if you blast through a ledge that an enemy is standing on, the remaining structure tumbles realistically to the ground instead of staying magically suspended in the air like a Looney Tunes gag.

Each member of your produce army has a unique power. Organic Panic's cherry can spew streams of dirt that injure enemies and chew through certain materials. The carrot and kiwi's powers are also element-based, allowing them to shoot jets of fire and water, respectively. These elements behave realistically as well; water flows and pools in contained areas (which can be used to drown enemies), and fire burns flammable materials and ignites explosive objects. Players control the direction of their projectiles with the left analog stick, which can be imprecise at long distances but allows for quick adjustments to your aim. The sample levels I played were an entertaining if sometimes unbalanced mix of action and puzzle-based gameplay. Organic Panic's meat and cheese enemies are considerably stronger than your vegetarian forces, and often tote guns, flame throwers, or explosives. Taking them down usually requires figuring out how to use the environment to your advantage. Even though I died frequently, quick restart times minimize the frustration. Later levels let you swap characters on the fly, allowing you to switch between abilities as need be.

The build I played didn't contain Organic Panic's in-game editor, but Last Limb says that all of the campaign levels have been built with the tool, and that the game has a system for sharing user-made levels similar to LittleBigPlanet. I also didn't have a chance to check out the co-op mode, but given how manic the single-player action is, it should be a lot of fun, even if it is nonstop chaos.

Organic Panic is only halfway to its modest $40,000 goal, which is distressing given how far along (not to mention fun) the project already is. If you're a fan of games like Worms and LittleBigPlanet you should check the Kickstarter page for more information, and vote for the project on Steam Greenlight. If all goes as planned, Last Limb will release Organic Panic on PC and Xbox 360 this October, with ports to other platforms coming later next year. 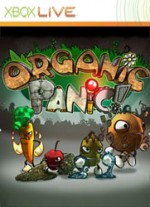