Roll7 Looks To Give Players An Addictive 2D Skateboarding Experience
by Matt Akers on Jul 05, 2013 at 03:30 PM Roll7's mission is to develop addictive 2D games. Based in London, it’s a studio dedicated to blending simple mechanics and design with balanced, challenging gameplay. OlliOlli, Roll7’s newest project, is a pixelated, side-scrolling skateboard game that does just that. It launches exclusively for PlayStation Vita later this year.

Although OlliOlli draws elements from the infinite runner genre, it moves away from the traditional, tired formula. Fans of the classic Tony Hawk series, and actual skateboarders, should be pleased to know that OlliOlli is strongly inspired by real-world skateboarding mechanics. Quality sound design, a genuine trick list, and demanding button timing lend a surprising degree of authenticity to this 2D game.

OlliOlli aims to bring another essential aspect of skateboarding to the virtual screen as well – difficulty. John Ribbins, creative director at Roll7, openly admits to the challenges he pits players against. “The penalty for missing the timing on a landing is deliberately really harsh,” he stated in an interview. “It's like a 0.001 multiplier, so it totally ruins your score if you land sloppy.”

Ribbins is in part referring to OlliOlli’s landing mechanic, which requires players to press “X” before they hit the ground. Between timing landings, grinding across five different stages, and chaining together combos from over 100 available tricks, players should have plenty of motivation to skate on towards their next high score. One of the game’s most interesting features is its daily grind mode, in which players can challenge other OlliOlli skaters around the world at a specific spot within a specific level. Players can practice the spot as many times as they want, but they only get one official try for the global leaderboards. The designated grind spot changes every 24 hours.

OlliOlli was originally planned for iOS, but the developers at Roll7 ultimately preferred the Vita’s physical controls to the touch screen. Ribbins says that the game will definitely be coming to other systems, “but not immediately.” Sony’s funding behind the studio has ensured its status as a Vita exclusive for the time being.

Below is Roll7’s latest OlliOlli video that showcases the game’s progress as of June. 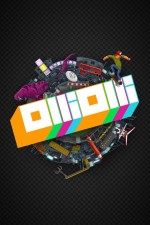