Vanillaware is doing more than just refining the visual style of its upcoming remaster of Odin Sphere, Odin Sphere Leifthrasir. This trailer showcases that in addition to giving the hand drawn art style an HD sheen, the combat and skills systems are being updated.

Leifthrasir will have over 200 new skills which can be unlocked through skill trees that are so enormous that they’re dizzying. Each playable character will have their own skill tree to unlock both passive and active skills, bolstering the progression system of the original game.

Your character and Psypher are both leveled concurrently by destroying enemies and picking up their dropped Phozons, experience points used to upgrade your skills and abilities. The more fleshed out combat and skills system appears to have been influenced by Vanillaware’s previous title, Dragon’s Crown. 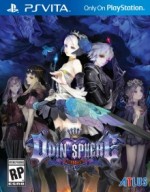