We were surprised to arrive at TGS and find that Nier is getting a unique treatment in Japan. Divided into two distinctive games, Nier Gestalt and Nier Replicant, the action RPG already appears to be aiming for a lofty goal—positioning itself as a franchise from day one. But despite having twice the content to gander at, details are none the more available.

What we do know is that only one of the tales will be making it stateside—Nier Gestalt, simply called Nier for our purposes. In a prior interview the creative team behind Nier, it was revealed that the title is actually the name of the main character, whose daughter is sick from a black virus infecting the entire world. We assume that finding a cure is the main motivation behind Nier’s actions. Unrelenting and unafraid, Nier seems content cutting his way through obstacles in order to uncover answers, making the game darker, grittier and bloodier than most tiles in Square Enix’s portfolio. Still, the publisher made a point to impress upon us that a strong narrative and well developed characters will glue together the more visceral aspects of the game. Little is known about Nier Replicant, other than it appears to take place in the same world, with the main protagonist fighting to save his sister as opposed to a daughter.

A side effect of the black virus, the world is plagued with dangerous shadow creatures called Shades. Our first look at Nier took place in a dilapidated library structure. Here Shades acted as little more than fodder, easy to take out and only finding real strength in their numbers. Active battle and non-random encounters kept the action high. Our TGS demo appeared to take place in the same location, instead trading small skirmishes for an impressive and intimidating boss battle. Two mechanical creatures, massive in size, used both physical and magic attacks to test Nier’s limits. Further complicating things, Shades randomly populated to increase the difficulty. Motivated to reach his daughter, Nier returned blow for blow, using both physical attacks with this imposing sword and magical spells summoned by the book floating at his side. We still don’t know what the lore is behind the book, but it’s obvious from our brief playtime and marketing materials that the tome plays an important role in the game.

Combat was extremely fluid and fast. Nier, spry despite his white hair, was able to dodge and jump out of harms way, aptly avoiding attacks once we nailed the controls. Landing blows with his sword resulted in a satisfying spray of blood, momentarily halting the enemy in its tracks. Close combat was balanced well with spells performed from a distance, shooting flaming projectiles from the book to make up for lost ground. From farther away the bosses defaulted to a charging attack, which was possible to avoid by jumping or rolling away, instead ending up behind the boss and exploiting a newfound vulnerability.

The boss fight included three tiers, each more difficult than the last. What started as an easily avoided line of fire turned into a massive influx of projectiles spraying in every direction. Not to mention the frequency and number of Shades increased. We’re wouldn’t have made it through the demo if not for a helpful assistant helping us navigate the Japanese menu to access a much-needed potion.

Although we didn’t get to explore much of the game outside of battle, what we did experience was on par with some of the top action games we’ve seen of late. The intensity of the demo didn’t break once, leaving us sweating and breathing a sign of relief once we finally bested the hulking creatures. Now we are itching to learn more about Nier’s plight and that of the world he lives in. If the story and characters can live up to the intensity of the action, Nier will be in good shape.

Nier is set to release in 2010 for the PlayStation 3 and Xbox 360. No word yet if Nier Replicant will make it to North America at any point in the future. 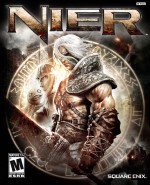