After building a reputation as one of the best sports games in the EA stable this generation, the NHL franchise's skates have lost their edge a bit the past few years thanks to a stagnant Be A Pro mode, troubled Be A GM mode, and tweaks to the gameplay that have irked some fans.

Though NHL 12 and 13 many not have had first-line form, the core of this hockey sim is still solid, so a return to Conn Smythe contention isn't entirely out of the question if EA Canada addresses its weaknesses. We spoke with NHL producers Sean Ramjagsingh and Andy Agostini about what changes the team has in store for NHL 14's gameplay and GM modes. That's everything we know about NHL 14 thus far. Stay tuned in the coming weeks as we learn more about changes to the Be A Pro (now dubbed Live the Life) and online modes. 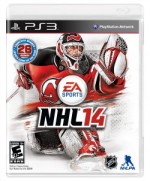