Neverending Nightmares, the horror game from Retro/Grade developer Matt Gilgenbach, has begun a Kickstarter campaign in order to complete development.

Gilgenbach revealed Neverending Nighmares last month. It's a radical departure from his previous title which was a rhythm-shooter. Gilgenbach describes Neverending Nightmares as a highly personal horror game that is a manifestation of his own personal issues with depression and OCD. Retro/Grade was a critical success, but a "financial failure" as Gilgenbach refers to it, and it caused him to revert into his depression, and inspire him to begin working on the game.

It's a horror-puzzle game with a focus on atmosphere. The player controls Adam who must figure out what is real, and what is a product of his subconsciousness as he continually wakes up in constatnly shifting realities. 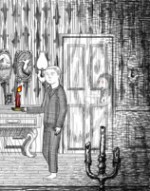