I’d like to blame Need for Speed: Rivals for turning me into a jerk, but maybe it was within me all along. As I raced across the roads of Redview County, I took every opportunity to make someone else’s life miserable. Whenever I saw the telltale icon over a car indicating that they were being driven by another player, my attention immediately shifted in that direction, like a laser pointer to a dog. Rivals is a racing game designed for griefers, and I loved every moment of it.

There are two paths in Rivals: the police and the racers. Each has its own career tree to unlock and liveries to upgrade, though you can swap between the two at will by visiting the game’s garage. Law enforcement focuses on incapacitating racers, either by ramming them enough or using gadgets like spike strips and EMP shockwaves. The racers, on the other hand, participate in – you guessed it – races, while doing their best to avoid getting nabbed by the cops.

That dynamic is interesting enough on its own, but it really comes to life in the multiplayer. It works in the background, pulling in six players who share the same world. Each person can do their own thing, activating AI challenges and races and progressing along their career tree. The cool part is how those events don’t happen in discrete instances. In other words, if you’re in the middle of a race and I’m nearby, I’ll see the race. And then I can pounce.

As a cop, I was encouraged to lay down those spike strips and bash a racer off the road. I had a fellow player alongside me. One interesting thing about the police path is that players are rewarded for cooperating. All of the police share the same reward for stopping racers, so it’s in everyone’s best interest to stick together and coordinate a strategy.

On the racing side, it’s all about individual glory. As I won a few races and evaded the police, I earned more cash. My heat level also increased, which acts like a score multiplier. There’s a nice risk/reward element at play, since players can choose to bank the points by visiting their garage. That resets the heat meter, though, so you'll have to earn it back. When the cops nab you, they get any unbanked points you have. The heat indicator that pops up above player-controlled cars (or AI, if you’re offline) is a nice sign of what you’re up against. Chances are, if you see someone with a level seven heat meter, they’re not going to be an easy mark.

Need for Speed: Rivals is coming to PlayStation 4 on November 15. 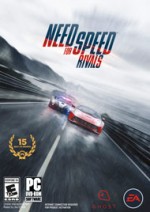